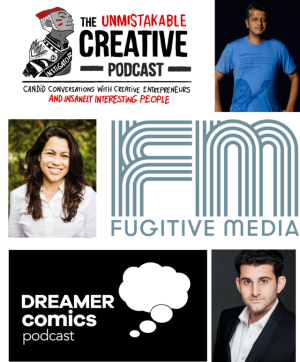 Two months ago RadioPublic announced Podfund, a venture-backed podcast incubator funded by $2.3-million in venture investments. It is an open-door plan that any audio producer can enter for a shot at gaining a $25,000-$50,000 bankroll, with a revenue-share plan of 7-15% over three years. Today RadioPublic is announcing three audio projects which have gained Podfund support:

Srinivas Rao is a prolific writer, podcaster, and keynote speaker who shares our fascination with creators. Srini self-published a Wall Street Journal best-selling book which was later picked up by Penguin. He’s also a gifted interviewer and has conducted hundreds of interviews with subjects from all walks of life, from bank robbers to billionaires to presidential candidates. Listeners say, “If TEDtalks met Oprah you’d have The Unmistakable Creative.” He started his podcast in 2009 and has since published over 700 episodes. Srini plans to use Podfunding to improve his website and overall SEO and invest in video companion content.

Led by CEO Stacey Book, Fugitive Media is an audio storytelling company specializing in narrative and travel. The team is comprised of film and TV veterans who built the worldwide content slate for the immersive audio app Detour, which was founded by Andrew Mason and ultimately sold to Bose. Fugitive will produce a mix of original and branded content, starting with In The Gap for Audible — look out for the launch in Q4 of this year.

Dreamer Comics is a weekly podcast where host Omar Spahi interviews comic book creators, including writers, pencillers, inkers, colorists, letterers, editors or execs, to understand the stories behind the images. Omar is a serial entrepreneur — he’s a comic book writer and publisher himself, he produces films, and he operates a real estate business in Los Angeles. Omar approached Podfund in order to help turbo-charge marketing/sales efforts and to finance a docu-series.