The Q4 2018 RAJAR results found that 48.4 million people, or 88% of the UK’s adult population, listened to their radio station of choice every week. The figure marked a second consecutive year of fourth-quarter decline in audience for radio, with 89.7% in Q4 2017 and 90.1% in Q4 2016. Survey respondents logged 1.002 billion average weekly hours during the period, with listeners logging an average of 20.7 hours of live radio every week.

Although the overall audience has dipped, the digital share for UK radio is rising. Almost two-thirds (63%) of the adult population tunes in to digital radio every week, an audience of 35 million people. Digital’s share reached 52.6% for the fourth quarter of 2018, continuing a slow but steady upward arc since 2011. Digital listening contributed 527 million hours of radio in an average week.

The fourth-quarter RAJAR data included a look at how much live radio is consumed on mobile devices. More than a quarter of UK adults claimed to tune in to live radio on a smartphone or tablet at least once a month. For the 15-24 age bracket, the rate jumped to 34.7%, while all over-25 listeners had an average of 25.8%. 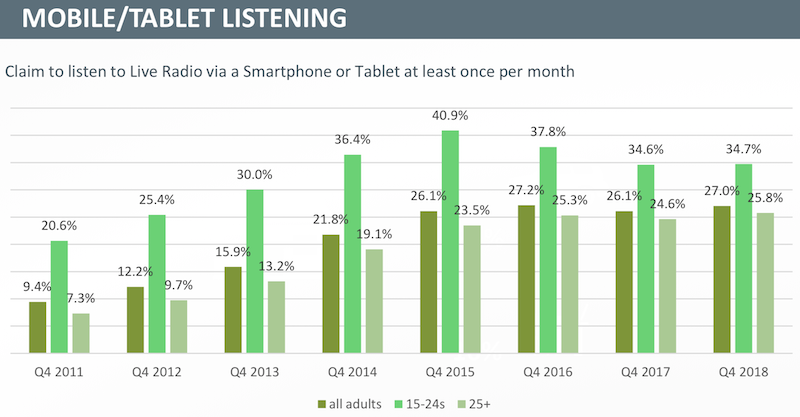