Podtrac released its July edition of the Top 20 Podcasts, ranking Podtrac measurement clients. (See below.) The Daily retained  its #1 slot in July, and in fact the top five shows all remained stable:

No podcasts entered the list for the first time, but one show reappeared — the venerable Serial, which leapt up 48 spots to claim #11 for July. No new season of Serial has launched. But the podcast’s parent company was recently acquired by The New York Times, which perhaps has resulted in new promotion, or placement of Times podcast episodes/trailers within the Serial feed.

Concerning the appearance of shows which post episodes throughout each day — in this month’s ranker they are NPR News Hour and CNN News Briefing, Podtrac supplies this footnote: “With the increasing popularity of shows which publish multiple times a day, we now include theses shows in the Podtrac Top Podcast ranking. Previously these shows were excluded. While the counts for these shows are IAB V2 compliant, it should be noted that a segment of their audience members may listen to these shows from multiple locations throughout the day and present themselves technically as multiple unique users.” 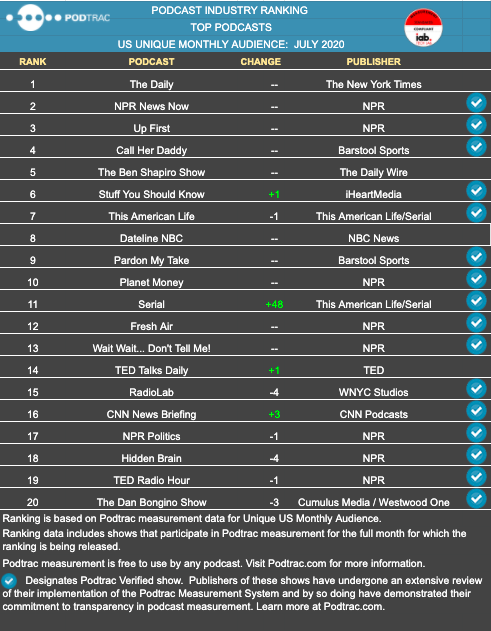