Podcast streaming on the platform increased by 61% globally. In Latin American countries, such as Mexico, that rate grew even higher with 127%, while the number of listeners increased by 40%
and 23%, respectively. 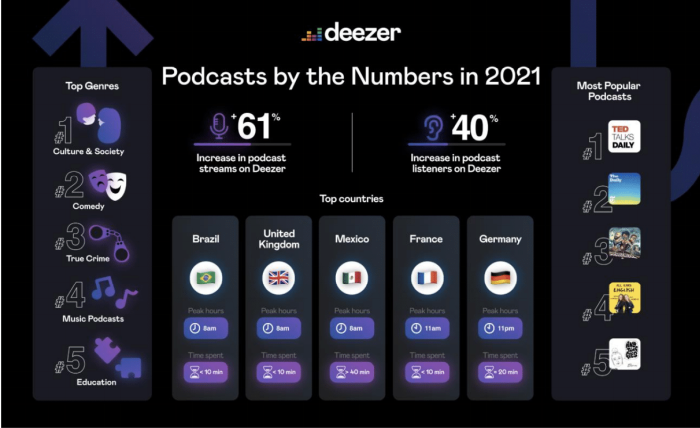 “This podcast trend is not slowing down anytime soon, as the average listening time on Deezer doubled
during the pandemic. […] Our podcast listeners around the world are mainly people between the ages of 25 and 35,” explained Deborah Jourdan, Deezer’s Head of North and Central America. She noted that the “young generation” take the lead in podcast consumption, at least on Deezer.

Notably, TED Talks Daily is the #1 podcast on Deezer’s global listening for 2021 (so far), bumping down The Daily which places #1 on some other rankers. Below are top podcasts in the U.S. and globally:

“This year, it’s ‘Culture & society’ that comes out top for the biggest podcast genre. ‘Comedy’ is second followed by a consistently top 3 genre ‘True Crime.’ ‘Music & audio comments’ and ‘Education’ complete the list.

“We have the most dedicated podcast fans in France, which takes the top spot in terms of podcast streams. The French are followed by listeners in Brazil, Germany, UK and Mexico. But it’s Brits that are spending the longest time listening, at an average of 40 minutes each time. Whereas in France it’s more likely to be quick 10 minute bursts. We’ve also seen that podcasts are more of a morning treat, with 10am the time that most of the world likes to tune in.”