In selecting an audio streaming platform, 78% of survey participants said ease of use was extremely or very important. Variety/availability of content received 72% of responses, while cost compared to free options had 64%. 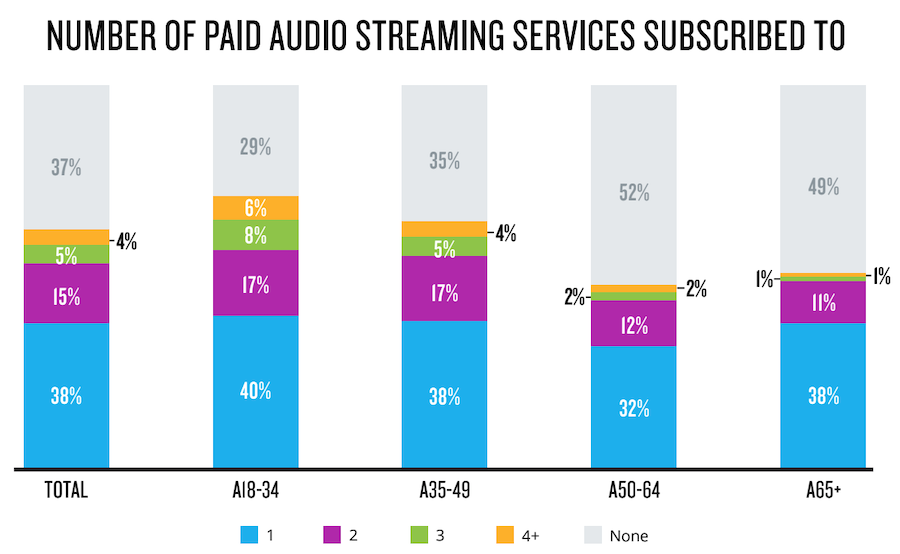 From the overall survey audience, 38% of participants subscribed to one paid audio platform, compared with 37% not subscribing to any. The balance shifted across age brackets. Ages 18-34 had 40% subscribing to one platform and 29% not paying for any, while ages 50-64 had the most extreme opposite result of 32% with one subscription and 52% with none.

Nielsen asked why respondents subscribed to additional paid services. The top reasons were a tie between “to access content ‘on the go’ or on mobile devices” and “to access content with limited or no commercials,” both with 39%. “To expand the content that I have available” had a 36% rate. In contrast, the overall cost of media services was the leading reason given for limiting the number of paid services participants subscribed to. Forty-three percent said they were already satisfied with their available options.

Streaming audio on a smartphone had 57 minutes of weekly time spent. For ages 18-34, the rate spiked to 1 hour, 39 minutes, and fell off for each older group down to just 19 minutes for ages 65+.