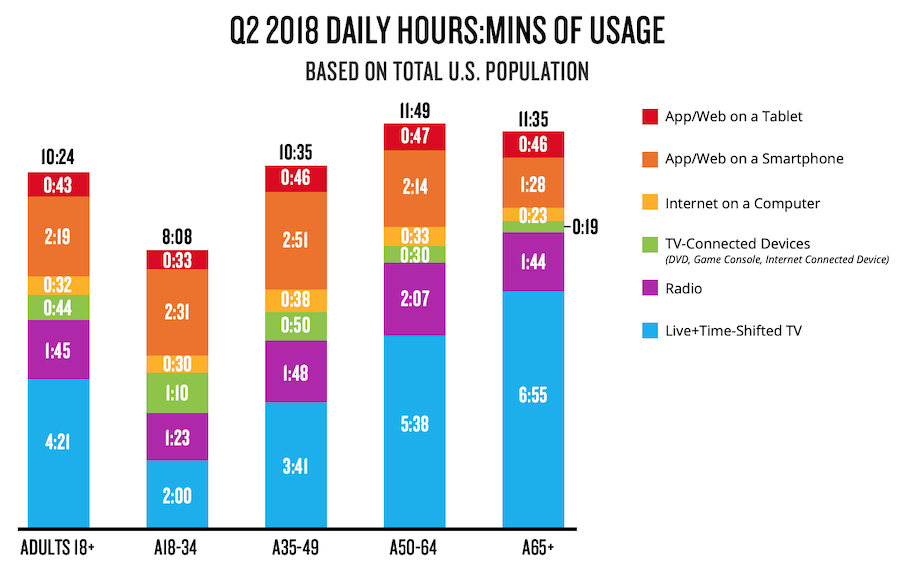 Specialized studies have been reporting growth in audio for years, and the general media research is reflecting the same result. Nielsen’s Total Audience Report for Q2 marked another steady quarter for radio, although its influence remains notably less among younger ears. The report also saw positive trends for smartphones, streaming audio, and smart speakers.

For the average U.S. adult, television remains the top source of daily media consumption at 4 hours, 21 minutes. Time spent in apps or on the web on a smartphone took the second spot with 2 hours, 19 minutes of daily consumption. Radio came third with 1 hour, 45 minutes. The age 18-34 bracket continued to post lower overall numbers than their older counterparts, most notable with just 2 hours of daily television usage. Daily radio use for this group was only a little lower than the average at 1 hour, 23 minutes.

Radio did continue to top the charts with weekly reach. Across the total population, radio had weekly reach of 92%, followed by 87% for live and time-shifted television, then by smartphones with 78%.

Smart speakers also figured in the report, with 24% of households owning the device, up from 22% in the first quarter of 2018. Music was the most common use case, with 90% of owners engaged in that activity on their smart speakers each week. Listening to news got a 68% response, followed by listening to sports updates at 52%. Listening to podcasts or audiobooks was a weekly activity for nearly half (45%) of smart speaker owners.

Weekly time spent on radio for all adults in Q2 2018 totaled 12 hours, 12 minutes. Streaming audio on a smartphone had 28 minutes of weekly time spent, and audio streaming via tablet had just 6 minutes. Again, the 18-34 bracket showed markedly different priorities. Weekly time for radio was 9 hours, 42 minutes in that youngest demographic. The weekly smartphone audio streaming for the group totaled 45 minutes and the tablet time was 7 minutes.

When narrowed down to look at weekly time spent among users of each medium, the figures posted a little less stark age-based disparities. Radio had 13 hours, 22 minutes for the overall adult audience and 10 hours, 47 minutes for ages 18-34. Streaming audio on smartphones totaled 1 hour, 5 minutes for the general population and 1 hour, 17 minutes among the millennials. Both the general and the 18-34 groups reported 46 minutes of weekly time streaming audio on tablets.