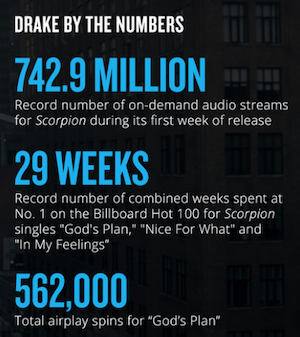 Nielsen has shared its insights on music industry statistics from 2018. The analysis showed that there were 611 billion on-demand audio song streams in 2018, up 49% from the 2017 figure. The total 2018 on-demand music consumption, both in audio and video, rose 43% to more than 900 billion streams. The strong growth in streaming helped drive 34% growth in digital audio consumption, which includes digital album purchases, track equivalent albums, and on-demand audio streaming equivalent albums. Total album equivalent audio consumption increased 23% from 2017.

The results continued to highlight the dominance of Drake, who secured several new records. His album Scorpion was the most-consumed of the year, and it generated 742.9 million on-demand audio streams in the first week of its release. Its singles spent a combined 29 weeks at the top of the Billboard Hot 100 chart, making Drake the artist with the most weeks spent at No. 1 in a calendar year. God’s Plan had 1.57 billion on-demand streams during the year.

Nielsen highlighted some other trends in music from the year. Soundtracks were big movers by sales and streams. Black Panther: The Album took the honors for the most streams of a soundtrack in a single week with 138.9 million on-demand audio streams for its tracks. The report also noted how music has become increasingly international, with Latin music and K-pop making a bigger influence on listeners in 2018.