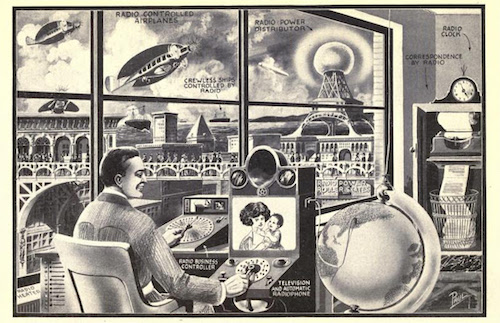 The image above is from Hugo Gernsback’s Radio For All, published in 1922. It’s supposed to depict 1972. As ever, it highlights that futurists (of which Gernsback was certainly one) always overestimate the rate of change. The link here not only links to the image, but to his section on “The Future of Radio” – it is, of course, about radio technology rather than radio programming. (Thanks to Larry Gifford for the spot).

In an idle chat a few weeks ago on Twitter, I asked to see presenter music logs from radio stations. (By a “music log”, I mean the thing that is printed out for presenters that tells you what songs you’re playing that hour, and where the ad breaks go).

I found one from 1996. It’s a pretty good example of a typical music log.It lists a song title and artist, and some rudimentary timings. Someone’s scribbled over this one with backtimings, because that’s what you used it for.

About the same time, I was using something looking very similar on Hallam FM. I assumed that it’s changed a lot. But it hasn’t. They’re almost entirely unchanged, excepting the use of a new font.

With the recent moon landing anniversaries, discussion online then went to talking about appropriate songs to play, and Tasmin Archer’s Sleeping Satellite popped up.

When Sleeping Satellite was a hit, I was working for The Pulse, a radio station in Bradford. Tasmin Archer was born in Bradford, and therefore at the station we typically called her “Bradford’s Tasmin Archer” whenever we back-announced the song.

Down the road at Aire FM in Leeds, they were calling her “Leeds’s Tasmin Archer”, because after she left school she worked in Leeds at the court there.

We all knew that Tasmin Archer was a local artist; but when playing Elton John and Kiki Dee’s Don’t go breaking my heart, considerably less of us back-announced her as someone born in Little Horton in Bradford.

And so, we come back to presenter music logs. As a tool to tell a presenter where the song goes, they’re great. But as a tool to make better radio, they appear to fall short: because they’ve no information at all.

When producing music logs today, it’s not difficult to highlight local artists from your transmission area. And if you stuck it through some software, it’s easy to pull the latest news headline featuring the artist; to grab their latest tweet, to see what they last posted on Instagram, just in case it would make a more interesting story on-air.

A smart music log would turn a lazy back-announce to something that sounds researched; acknowledges the local area; and could make any station sound a little more alive and up-to-date.

Today’s technology could do all this automatically. But it turns out that at least one station has done this – the UK’s Classic FM, which appeared, at least for the launch of the station, to have information carefully typed, with an actual typewriter, onto the music log.

Technology can do so much to change the way we make radio, for the better. I wonder who’ll pick up my challenge to produce a better music log for all of us.

(And thanks to someone who’s mentioned that this sort of information appears in RCS Zetta, which is nice).