Greetings, and apologies for an impromptu week off last week. Lots of conferences to speak at – like the OAB, above – and not enough time to spend on this, which is a welcome problem to have. I very much enjoyed the conference keynotes last week week: Oslo, Orlando and Ontario. In person next time though!

RAJAR used to be wholly worked out by diaries (mostly online, not paper): people would note down in a table what stations they listened to and when. That sounds hilariously arcane – but actually delivers really reliable figures: RAJAR interviewed a fresh batch of 20,000 people for each survey, but in spite of that, the results are really consistent: take a look at BBC Radio 2 or those for LBC to see how consistent they are.

Now, RAJAR has done two things. First, they’ve added a “panel” – survey parlance for “asking people we’ve asked before”. RAJAR is always conducted with at least one face-to-face interview, and a panel presumably helps them achieve their numbers during continuing pandemic-related issues.

(As Matt also notes, PPM means significant changes to how you program and brand radio stations).

So, what happened in the UK?

First, I wanted to acknowledge The Radio Academy’s tweets on RAJAR day. Exactly the right tone, exactly the right message, and there’s nobody else to do this. Congratulations to them: very impressive.

The data was picked apart by Adam Bowie and also by Matt Deegan, so if you want to really dive in to the data, that’s worth doing. Adam’s graphs are all interactive.

The thing that I noticed in this graph from Matt’s piece is the uniformity of radio’s multi-platforms in the UK. Historically, DAB has suffered during drivetime periods, the internet always being later to peak than broadcast, etc etc. Now, all of those platforms behave identically. 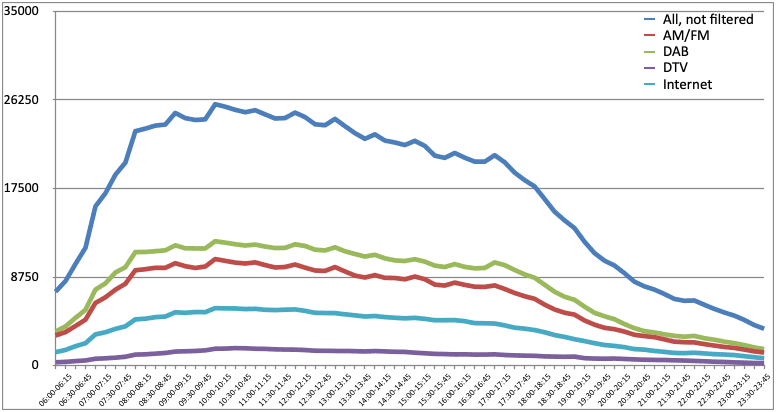 Radio during the day (This graph is just Mon listening, by the way; Mon-Fri data suggests the weekday breakfast peak is still at 8.00am, as I understand it).

Both these new stations are fascinating models. Boom has with no studios or offices of any kind: every presenter contributing from home, and funded with ads; while Times Radio, operated by the same company as owns The Times newspaper, purely financed by sponsorship and Times subscriptions.

Lots to think about.

Foxtel, the Australian equivalent of Sky or DishTV, now has more subscribers by streaming IP than it does via cable/sat broadcast. The internet infrastructure here, run by a government-owned operator which ISPs rent space from, has held up quite comfortably. If there are any geeks reading this email (and there ought to be!) then this graph, if you choose “Bundamba Link 2”, is my local connection to the internet and how congested it is.

Ad man Bob Hoffman writes about his approach to advertising: the three-word brief. Bob writes really well, and I love this stuff.

“If radio won’t reinvent itself, maybe someone else will” says Fred Jacobs, pointing out that AM/FM’s intertia, tradition and habit is harming its future.

Finally for this week, my friends at AccuRadio contact me with this terrible idea for a radio station. Luckily, the other channels available on the excellent AccuRadio make up for this one awful mistake.

Oh, and nothing to do with radio, but just in case it’s interesting: I discovered all the things Twitter knows about me, and I don’t like some of them much.