Greetings! I’m waking up after a bit of a drowsy week after my booster jab. Let’s wake up together, shall we, with a small rant? 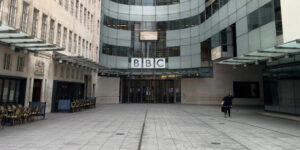 The UK’s current Conservative government are made up of possibly the worst set of dangerously dim-witted oxygen-thieves that it’s possible to imagine; and I thought I’d seen it all when one of them, the stupid Andrew Rosindell, stupidly stood up in the House of Commons, be-flagged, and stupidly asked what can be done to get the BBC to play the National Anthem at the end of every day’s broadcasting.

Sadly, stupid Andrew Rosindell, the Member of Parliament for Romford (which for all its many faults, surely doesn’t deserve this bloke as their MP), doesn’t realise that BBC Radio 4 ends every day’s programming by, um, playing the National Anthem.

Stupid Andrew Rosindell doesn’t listen to BBC Radio 4, that much is clear, but he was asking the question to stupid Nadine Dorries, the UK Culture Secretary, who apparently replied that it was a good question.

I thought nothing of this until stupid Nadine Dorries – who erroneously thinks Channel 4 takes money from the government, and is “amazed to learn” that young people use YouTube – stupidly announced (in the stupid person’s newspaper of choice, the Mail on Sunday) that the BBC’s licence fee would be frozen for two years and then this funding would be abolished altogether in 2027.

The way the BBC is funded is by a household fee of US $216 per year. For that, you get ten national TV channels, regional newsrooms, ten national radio stations, more than 40 local radio stations, and a variety of online services; it produces content in every spoken language in the UK including Welsh and Gaelic, does an especially fine job of producing commercially unviable content, and is one of the most well-regarded broadcasters in the world. Stupid Dorries would get rid of all that, for some stupid reason.

Stupid Nadine Dorries has since changed her stupid mind, which rather highlights that she might just have been stupidly trying to make a big media smokescreen to cover up for her even stupider boss, stupid Boris Johnson, who’s inexplicably still in a job at the time I write this.

The damage is done, of course. Other public broadcasters will now be at risk, since if it’s good enough for the BBC, it’s good enough for them in their country. We can expect (further) threats to the ABC’s funding in Australia, that of the CBC in Canada and in other countries, because stupid politicians will have listened to the stupid politicians in the UK.

But – could I recommend this piece of research from the Public Media Alliance which dives into the finances of public media companies across the world. The appendices are particularly helpful if you’re trying to get a handle for how it all works.

Phil Riley wrote a rather fine blog post about what privatising BBC Radio would mean. It would, in a nutshell, mean significant (60%) cuts in programming, and the move would also plunge commercial radio broadcasters into significant loss, since there’s not enough radio revenue to go round. (Phil Riley is also on The Media Show this week), not that Andrew Rosindell would have heard it, since it’s on Radio 4.

In short, losing the BBC’s funding would be a disaster for radio. That would be rather stupid. I hope it doesn’t happen.