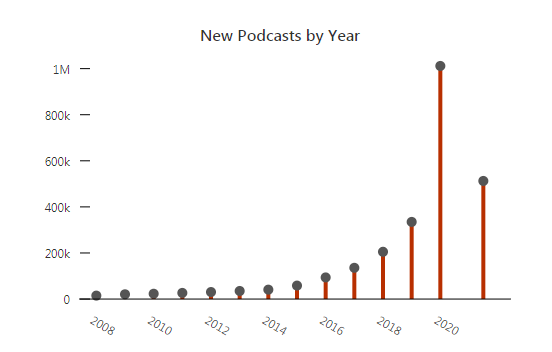 As the industry knows, 2020 was an unusual year, when people restricted to their homes started new podcasts at a record rate — just over a million new shows launched last year.

All this transpires in a podverse of 2.5-million shows and 190-million episodes.

A great majority of podcasts are in English and published in the U.S. Spanish shows in Brazil take a  robust second place.

Looking at hosts, it is perhaps unsurprising that the no-cost, spotify-owned Anchor ranks #1 in number of podcasts on the platform, but the extravagance of that industry-leading position might be surprising. Anchor hosts 1.4-million shows, and owns a 56% share of that market. The #2 host is Soundcloud, with a 5% share.