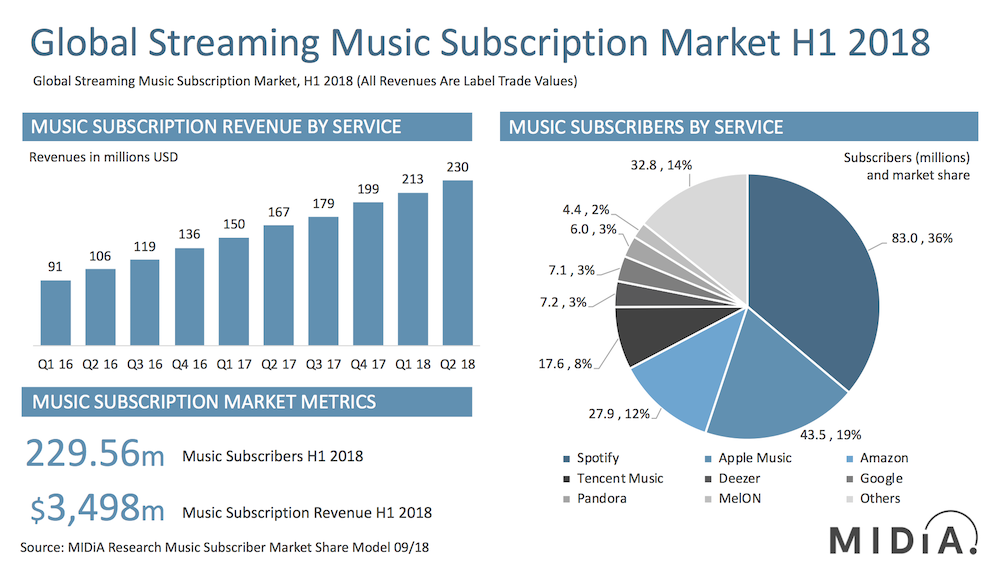 MIDiA Research has released its data on the global market shares held by streaming services at the midway point of 2018. Overall, music subscribers totaled 229.5 million in H1 2018, an increase of 16% from the end of 2017 and up 38% over the year-ago period. Revenue generated by those subscribers in the first half of 2018 reached $3.498 billion. The organization’s quarterly breakdown of subscription revenue shows a total that has steadily risen since the beginning of 2016.

“MIDiA maintains its viewpoint that this growth phase will last through the remainder of 2018 and likely until mid-2019,” the group said in its blog report sharing the data. “This will be the stage at which the early-follower segments will be tapped out in developed markets.” After that phase, MIDiA predicts that growth will come from mid-tier streaming markets. Those regions — such as Brazil, Mexico, and Russia — will likely see revenue rising more slowly than subscriber numbers due to telecom bundling and other aggressively priced options for paid access.

Spotify has the largest slice of the global subscription pie, with its 83 million paying listeners securing a 36% share. According to MIDiA, Spotify added more subscribers than any of its rivals during the period, with 39% of all net new subscribers worldwide joining that platform.