Only the top five, making this an ultra-short list for Forbes. Still, interesting.

Forbes has gathered earning information covering January 1 2019 to January 1 2020. The numbers are based on data from Apple, Stitcher, Magellan AI, Edison and Pollstar, as well as interviews with industry insiders. Ad revenue is included as well dollars  from touring and premium memberships. Forbes also included spin-off products like books and YouTube videos. Based on the sources and the the insistently impermeable economics of podcasting, RAIN surmises that the Forbes numbers are blunt approximations only. Forbes itself notes: “Podcasting is still a nascent business, and access to data is limited.”

Anyway, on to the short list of top earners.

Interesting spread! Joe Rogan is always categorized as a comedy show, but is not one really. It is long-form interviews, including chuckles which naturally occur in a lengthy conversation. Same with Dax Shepard. My Favorite Murder is true crime, of course, and also a kind of buddy-chat show. Dave Ramsey comes from radio, and is self-help with financial matters — the most purely educational show in the group. Bill Simmons is sports, and he is reportedly shopping his entire network (of which his show is the flagship) to Spotify.

According to the latest count, about 899,995 other shows make a bit of money, too. 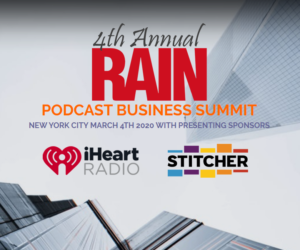