Edison Research and NPR have released the results of a new survey into consumption of spoken word audio content. It includes five years of previously unreleased data about audio, including podcasts, news, sports, talk radio, and audiobooks. The Spoken Word Audio Report found that 73% of the U.S. population listened to spoken word audio in the past month. In addition, 121 million Americans listen to spoken word audio every day. The audience has grown by 16 million people in the past five years.

Within the monthly spoken word audience, 59% are digital-first listeners. These individuals consume audio primarily on their computers, laptops, tablets, smartphones, or smart speakers. The other 41% are analog-first listeners who favor AM/FM radio.

Digital listeners are more likely to be younger, with 43% in the age 18-34 bracket compared with 17% in that age group among analog listeners. In contrast, only 23% of digital-first listeners are age 55 and up, whereas that group accounts for 53% of the analog-first audience. Both groups are majority white. Among digital listening, 17% of the audience is Hispanic and 14% are African-American. Hispanics only account for 10% of the analog group and African-Americans are 4%. The gender divide leaned slightly more toward men in both audiences. 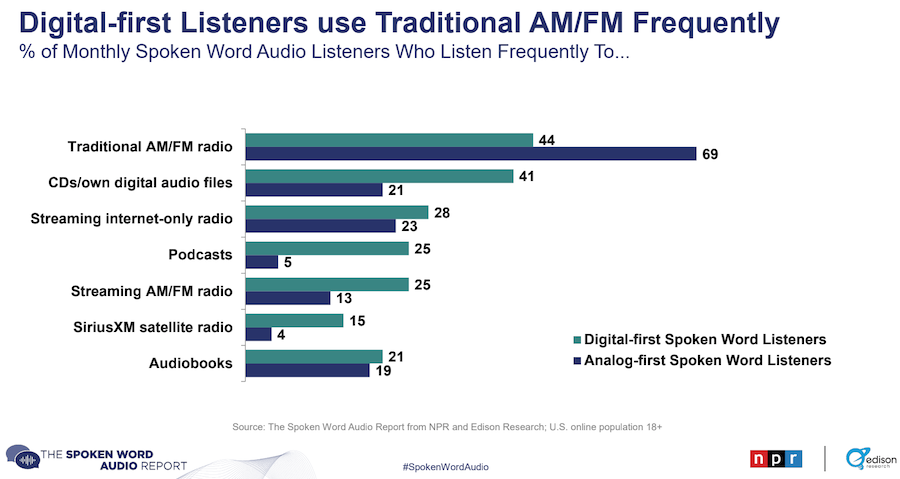 The report observed that digital-first listeners do also tune in to broadcast radio. Almost half (44%) of the digital-first monthly audience said they frequently listen to AM/FM radio. The analog group is more likely to listen to radio frequently (69%). The digital audience generally had higher rates of consuming other forms of audio, including 28% frequently listening to streaming internet-only radio, 25% listening to podcasts, and 21% listening to audiobooks. The digital audience also posted higher rates of using voice assistants across all devices.

Finally, the report observed trends in listening on mobile platforms. The mobile device share of time spent listening increased from 9% in 2014 to 22% in 2019. All age brackets also posted large jumps in mobile use for spoken word in that time period. Spoken word audio accounted for 11% of all daily smartphone audio listening in 2014. That share doubled to 22% in 2019. 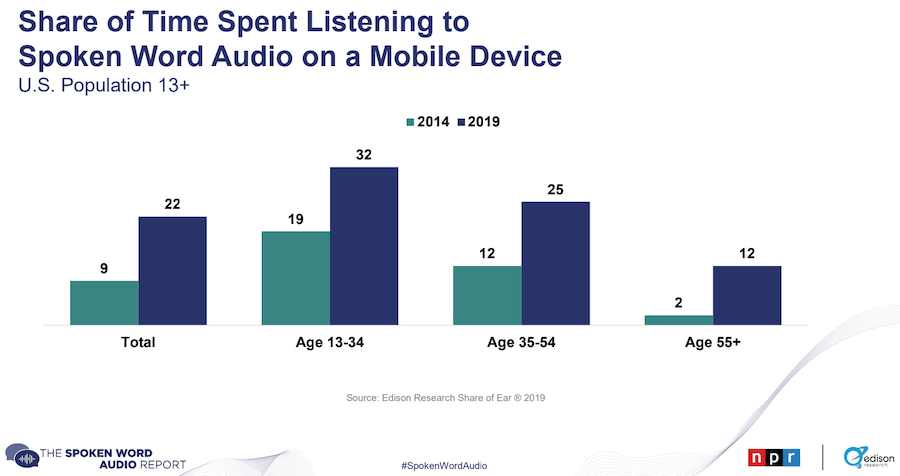