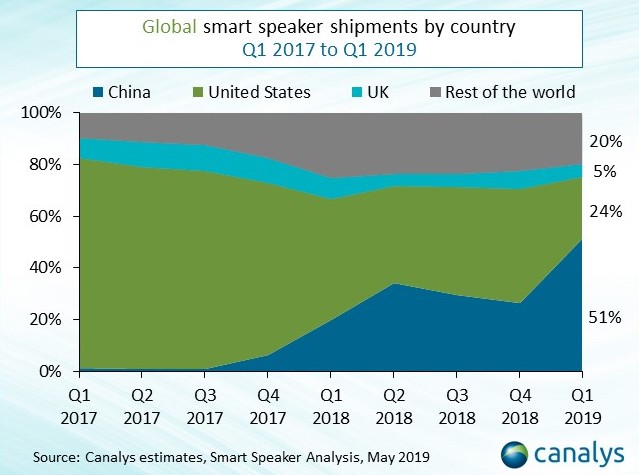 The strong regional results were mostly driven by market increases from Baidu, one of China’s tech companies. It topped the local market thanks to heavy marketing and an exclusive sponsorship deal with national television channel CCTV around Chinese New Year’s Eve, according to Canalys.

“The lightning fast development in China is largely driven by vendors pouring in large amount of capital to achieve dominant share quickly,” Nicole Peng, vice president of mobility at Canalys. “This strategy is favored by internet service providers like Baidu, Alibaba and Tencent who are used to spending billions on traffic acquisition and know how to reach critical installed base fast.”

Despite a big surge from Baidu, Amazon and Google remained the top companies for global smart speaker shipments during the period. Amazon kept a Q1 2019 shipment market share of nearly a quarter (22.1%), while Google’s 16.8% kept it just ahead of Baidu at 16%.