Digital audio revenue is mostly derived from subscriptions, which will reach nearly two-thirds of total revenue in 2022. That analysis comes from eMarketer, which illustrates the past and projected future trendline: 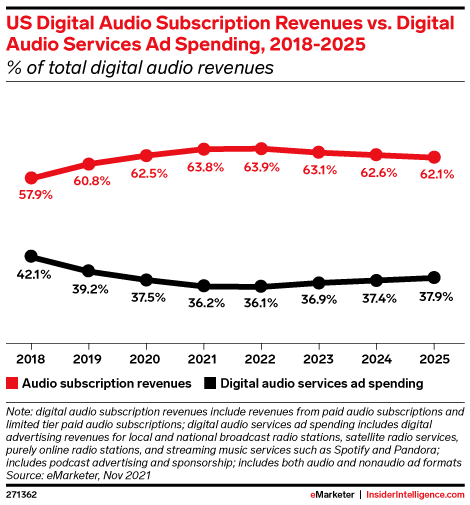 “As subscription revenue increased between 2018 and 2021 as a share of total audio revenues, digital ad spending waned,” according to eMarketer. The research includes digital audio advertising revenues across digital AM/FM radio, pureplay internet radio, satellite radio, and streaming services like Pandora and Spotify which are partly funded by audio advertising.

The study notes that Spotify owns the largest share of subscription revenue among the major players (including Apple, Amazon, and Google).

2022 is projected to represent a peak in the subscription share of revenue.