Venerable streaming music service AccuRadio sent around a notice that it has curated what the company describes as the world’s largest playlist of holiday songs. We won’t argue — this juggernaut of holiday cheer contains 17,000 tracks, and would require over five weeks of uninterrupted streaming to hear them all.

AccuRadio users should look for “Holiday Music: Wide Playlist.” It is part of an extensive holiday offering containing 100 holiday stations. as part of the service differentiation, AccuRadio stations are programmed by people — no AI personalization. (During this time of year the station curators are called “programming elves.”) 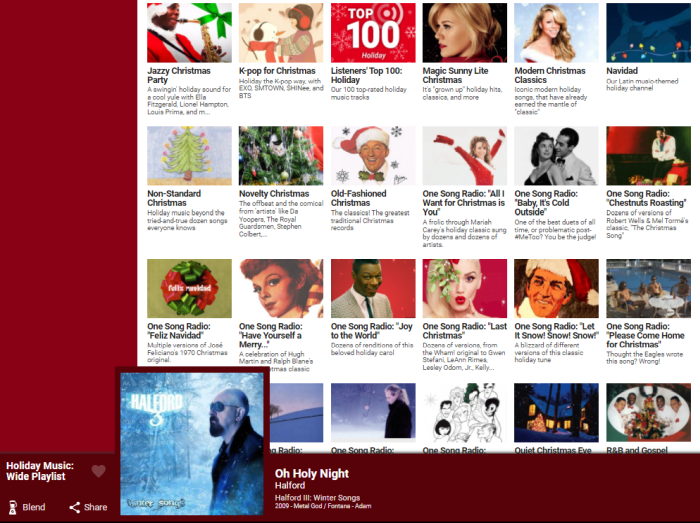 The entire holiday offering, including “Wide” is HERE.

In that extravagant mix are AccuRadio standby playlist types: “50/50” (half the songs are holiday oriented in various genres) and several “One Song Radio” playlists which feature multiple covers of single Christmas songs.

The 100 holiday playlists resulted from a New Year’s?) resolution in 2020 to exceed the 81 channels developed that year. Today’s announcement promises more to come before this year is out.

“Years ago, I started AccuRadio, now with its incredible array of channels, because I was tired of traditional radio stations playing the same songs over and over,” said Hanson. “It’s even worse at Christmas time, with FM stations typically playing a short playlist of about 200 songs over and over again. Maybe we’ve gone overboard with our 17,000-song channel, but what’s the Christmas season without some extra joy and generosity?”