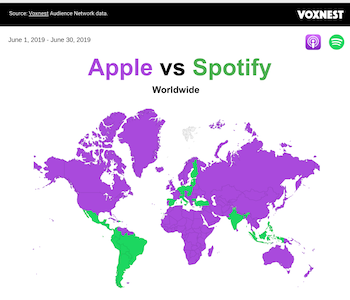 Voxnest shared its latest data comparing the popularity of Apple and Spotify for podcast listening. The information from its Voxnest Audience Network revealed that Spotify has taken the lead from Apple in the Netherlands, Germany, and Bulgaria as of June 2019. VAN includes the audiences of all properties under the Voxnest banner, including Spreaker, Dynamo, and Blog Talk Radio.

Spotify’s growth in Europe is paired with continued dominance over Apple in much of South America, Latin America, and India. Apple remains the more popular podcast service in established and growing markets such as the United States, Canada, Australia, much of Asia, and all of Africa.