Voicebot.ai has released a new report about the smart speaker market in Australia. The nation is now in the early majority stage of smart speaker adoption, reaching a similar point as the U.S., yet on a faster pace.

The country’s hardware user base relative to population is now greater than the United States. There were about 5.7 million Australians who owned smart speakers at the end of December 2018, meaning 29.3% of all Australian adults have access to a smart speaker. The results show rapid growth from zero availability 18 months prior.

The most common use case for smart speakers is to ask a question, followed by listening to a streaming music service. Even within the questions asked, music was the most common topic with a 47.7% share. 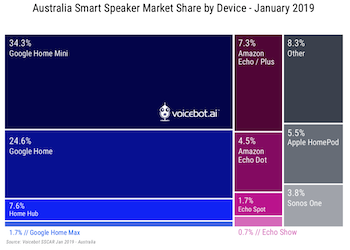 Google is the top brand for smart speakers in Australia with 68% market share. The Google Home Mini is the leading product with a 34.3% share, while the core Google Home speaker has a 24.6% share and the Google Home Hub had a 7.6% share. Amazon has just 14.2% of the Australian install base and Apple took 5.5%. These results are the inverse of the brand shares in the United States, where Amazon is the leading brand.

One in five of the Australian smart speaker owners possesses a smart display. The 22.2% rate in Australia exceeds the 13.2% rate in the United States. Voicebot noted that the display hardware has also seen a fast adoption rate, with most models only becoming available in 2018.