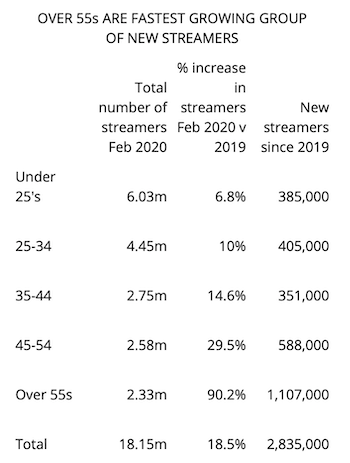 Most surveys into music streaming habits have seen the activity centered on the younger generations of listeners. According to research from the Entertainment Retailers Association, older audiences may start catching up.

The latest data from the organization found that the 55+ age bracket was the fastest-growing group in new users of subscription streaming services in the UK. Its panel research estimated that more than 1.1 million people aged 55 and up had signed up to music subscription services between February 2019 and February 2020. That figure means the 55+ listeners accounted for more than a third of the 2.8 million new listeners added in the UK over that year. The 55+ group saw 90% growth in its streaming music audience for the period, compared with the 18.5% growth overall.

These are exciting results for a group that has frequently seemed resistent to streaming audio. It’s worth noting that new user growth rates for younger generations will be smaller because many younger listeners are existing users. ERA found that more than half (57%) of streaming users are age 34 or younger.