The U.S. recorded music industry will exceed a 48-year revenue record set in 1999, according to RAIN’s examination of reports from the RIAA (Recording Industry Association of America). If 2021 second-half revenue follows an existing five-year pattern in relation to 2021 H1 revenue (already stated by the RIAA), there will be a new high-water mark for the industry when the full-year report comes out. The full revenue report for 2021 will be released by the RIAA in the first quarter of this year.

The revenue milestone we project here would complete a full recovery from the decimation of CD sales wrought by a succession of market trends that included unauthorized file-sharing, the iTunes Music Store, and the growth and eventual domination of music streaming.

The historical revenue high point, as illustrated in RIAA’s chart below, was set in 1999 at $14.6-billion in recorded music revenue. 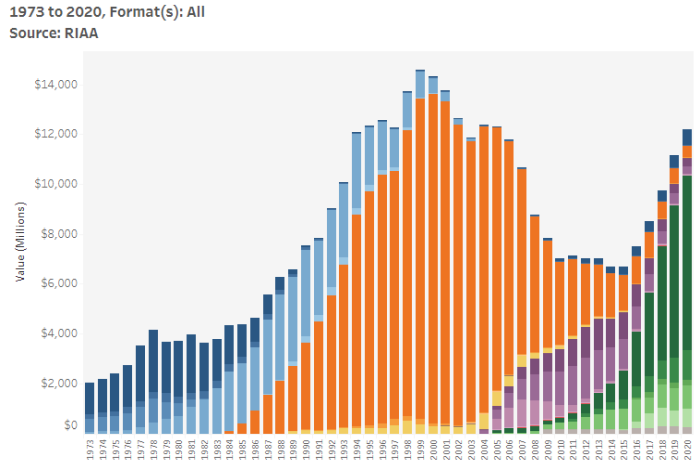 During that peak year of 1999 the Napster file-sharing platform was launched and quickly became staggeringly popular and flamingly controversial. Napster started a revenue downturn. The platform was shuttered in mid-2001 after a two-year storm of legal push-back from the RIAA and major labels. But by then consumer viability of the CD product was damaged. Other file-sharing venues continued to operate, and the CD category weakened further.

Coincident with those developments, legitimate non-CD markets developed online which hastened the downfall of physical recordings. The Rhapsody streaming service began in 2000, and the iTunes Music Store started selling downloadable singles and albums in 2003. The collapse of CD revenue accelerated precipitously between 2006 and 2010 (see the chart above). In the 2010-2015 period, total U.S. recorded music revenue was mired between $6.7B and $7.0B.

2016 was the year in which music streaming took the category lead away from CDs, with subscription revenue powering the engine. Since then, total income to labels has streaked upward.

Our projection (that 2021 revenue will exceed the high water mark of  $14.6B in 1999) is based on a review of H2 revenue exceeding H1 totals in each of the past five full years. (Note: This calculation does not account for inflation. There is argument about whether it should.) 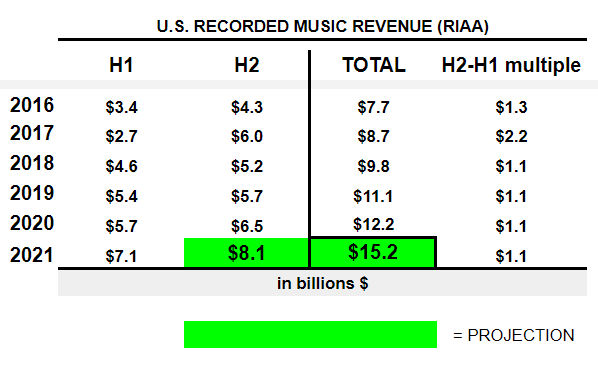 Second-half reports in the past five years (2016-2020) show persistently higher revenue in H2 compared to H1. While the H1-H2 increase can not be predicted with precision, we acknowledge the consistent trend and settle on the 2020 multiple (1.14x) to project 2021 total revenue.

The CD’s demise in the new millennium was an emergency for the U.S. recorded music business. Creation of the iTunes Music Store in 2003 was an early crisis solution, offering a legal and revenue-driven alternative to unauthorized file-sharing, and giving consumers a safe, authorized marketplace of downloadable singles and albums. The chart below highlights the revenue shift created by iTunes sales: 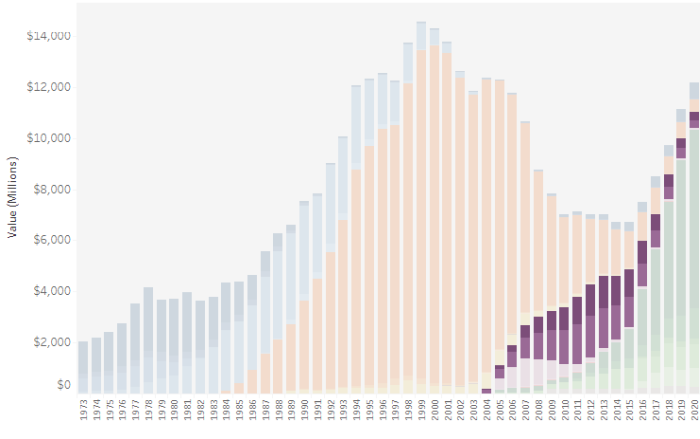 While the iTunes Music Store pushed back against unauthorized file-sharing, and also took revenue share from CD sales, that shift was transitory, setting the stage for streaming. The graphic below illustrates how streaming powered total revenue upward while pushing CDs and download sales downward: 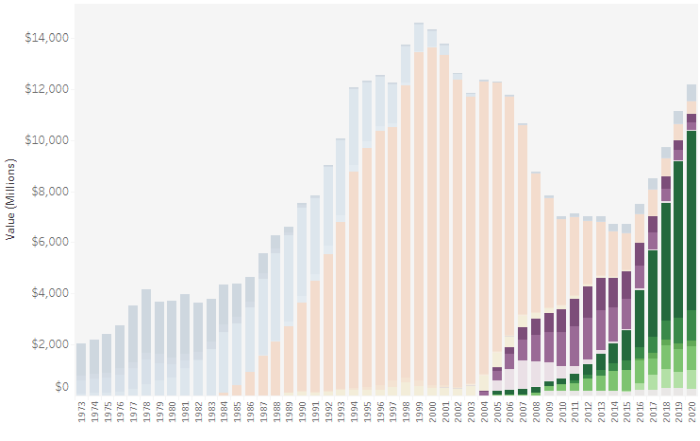 In its push to become the dominant revenue driver for the U.S. record industry, streaming has refuted a common turn-of-the-century assumption that consumers would not pay to access cloud-based music. That scenario was commonly called “renting music,” and sometimes still is. A recent article in The Atlantic questioned the proposition all over again.

But “renting music” via subscription service has proved to be the most important savior of the U.S. music business, contributing $7-billion in 2020 and accounting for nearly 58% of total 2020 revenue.

A significant puzzle piece is absent from all the charts above: AM/FM radio revenue. That’s because in the U.S., almost uniquely around the world, radio stations are statutorily exempt from paying royalties to labels and recording artists for the use of recorded music over the air. (American radio does pay songwriters and publishers on the creative side of music copyright. And, American radio pays labels/artists for using their records in radio-station streams.)