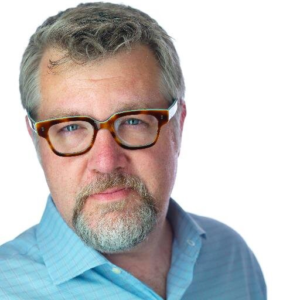 Tom Webster is Senior Vice President, Strategy and Marketing, at Edison Research, the preeminent media research company addressing how people listen to audio. He is a frequent keynote speaker at podcast and digital audio conferences. This column was originally published in Medium.

Every year, Edison Research and Triton Digital produce the Infinite Dial, which for nearly 25 years has been (among other things) the most reliable bellweather of the current state of audio consumption in the U.S. For podcasters, the numbers have taken on an even greater import as the medium’s annual “health check,” so I wanted to provide a little insight into how to read some of the health indicators that might otherwise get glossed over.

First of all, podcasting is still growing, there is no doubt about that. The sharpest growth for 2021 was in weekly listening, which is up 17% year-over-year. 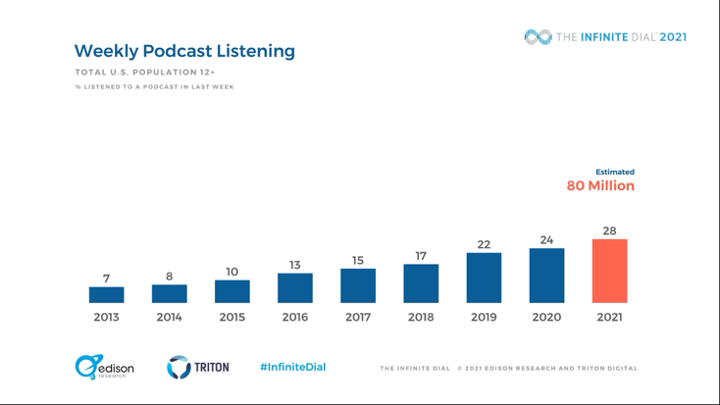 You can eyeball “growth” from a chart like this, and to paraphrase Gordon Gecko, Growth, for lack of a better word, is Good. Some years, the slope of this growth is greater than others — but when it appears to slow, that doesn’t necessarily mean the medium is not healthy. One of the things that brand researchers like to look at is a comparison called ATU. No, that’s not how Americans measure natural gas post-Revolution; rather, it stands for Awareness-Trial-Usage, or an analysis of the conversion from simple awareness of a medium to making it a habit.

Here’s a little back-of-the-envelope way to gauge podcasting against the larger backdrop of online audio. If we compare the percentage of podcast listeners who say they have listened to a podcast in the last month to those that have listened in the past week, we get something that looks like this:

You don’t need to be a statistician to see that all of these numbers (including the year — FATHER TIME IS UNDEFEATED) are increasing. Now lets add a little color to this graph:

Essentially, this number approaches as close to 100% as it is going to get when a medium approaches maturity. For comparison, here are the same figures for online audio listening (streaming, essentially) from the Infinite Dial over the same period:

When a medium has just started to go past its sell-by date, like milk gone bad, you see that conversion percentage fall (and yes, it has fallen for some forms of media. You can imagine these data for traditional linear television, for example.)

Here’s one more measure along these lines — the relationship between the percentage of Americans 12+ who are aware of podcasting to those who listen weekly:

Again, all of these numbers are growing, which is good. But more significantly, the ratio of weekly listening-to-awareness of podcasting is growing (and these ratios don’t necessarily have to grow, right?) Here’s what this ratio, and its growth, tell us: podcasting isn’t just getting “bigger,” it’s getting better. What converts people from awareness to usage to habit is not the inevitability of the passage of time, it’s improvement — better content, better access, better discovery — better podcasts. Again, imagine what this conversion percentage from awareness to weekly consumption might look like for linear TV, and you can see there is a lot more room to grow.

That’s a lot of numbers and backs of envelopes, so I’ll stop there. I hope that’s given you another way to parse these “currency” metrics as they come in each year. It is the growth in these key ratios, not just their component percentages, that tells us podcasting has miles and miles to go before it reaches its full potential.

For more insights on podcasting and audio, sign up for my newsletter, I Hear Things.