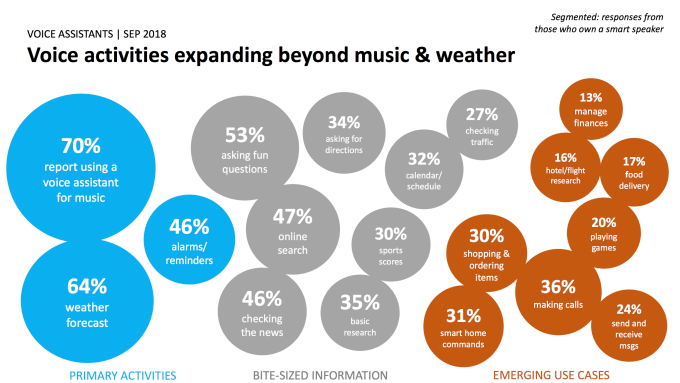 New research from Adobe Analytics adds to a healthy picture for smart speakers. The firm’s data found that 32% of consumers owned a smart speaker as of August 2018, up from 28% in January. The product segment posted 14% growth between those months, a period that didn’t include any major shopping events. Adobe projected that the rate of ownership will rise to 48% after the 2018 holiday shopping season. Almost half (45%) of consumers who already own a smart speaker said they expect to buy another for themselves during the holiday season, while 23% said they expect to buy one as a gift.

The Adobe survey also found that playing music was the most common activity for voice controls at 70%, followed by getting a weather forecast at 64%. Asking fun questions took 53%. The survey found that 30% of smart speaker owners used the devices for tasks related to shopping, such as comparing prices or conducting product research.

The survey covered 1,000 participants from the United States.