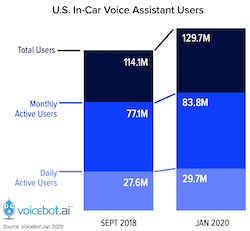 Those figures are on the rise, compared with survey results from September 2018. The report cited growing availability of voice assistants through aftermarket and first-party infotainment dashboards and a wider array of services as reasons for the growth. It also noted that growing use of voice assistants on other hardware could be increasing familiarity, which would boost in-car use.

The largest share of in-car voice assistant use is of whatever solution is embedded into a car, with 33.2% of the responses. The second most-common response was use of a smartphone voice assistant via Bluetooth at 30.5%. More than a quarter (26.7%) of respondents said they use Apple’s Siri/CarPlay from their dashboard. Google Assistant and Amazon Alexa in the dashboard trailed with just 7.5% and 2%, respectively.

The most common activity for in-car voice assistants was making a phone call with 73% of the overall use cases. Starting music had a 27% share of overall use, while starting a radio station was 14% and starting a podcast was 10.8%. The survey didn’t specify any additional playback controls in this segment of the results.