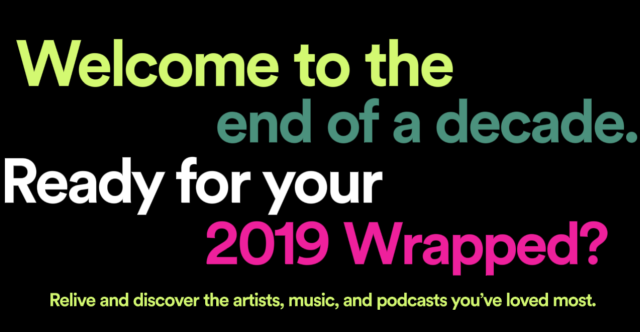 Spotify’s “2019 Wrapped” website production for Premium subscribers is as fun and informative as ever, even more expansive because it wraps not only 2019 but the “teens” decade of 2013-2019, with a beautifully fluid user experience.

Every year Spotify provides listening metrics for Premium subscribers, showing what they listened to most, and providing a playlist of year-long favorites. Each year the website design of this feature has become more sophisticated. For 2019, the downward-scrolling presentation has lots of continuous movement, and continuously playing music which reflects the particular musical focus of each of the 16 slides.

Spotify takes advantage of the Teens-ending 2019 Wrapped to include summaries of total Teens listening for any member who has subscribed since 2013. In our Premium account, in both the 2019 and Teens wrap-ups, we discern that the most-played songs and albums are highly positioned because of either happenstance or accident.

The happenstance part is our realization that the most-played songs in different categories tend to be the first songs of playlists. One example is a home workout playlist, typically played through a smart speaker during calisthenics workouts. A few seconds after starting the playlist, we tell the smart speaker, “Shuffle this list.” The shuffle action begins after the first song is complete — or immediately if we ask the speaker to  skip the first song. Either way, the first song gets credit for an outstanding number  of plays (assuming we’re working out sufficiently). It’s not that we particularly love the song. And in our case, the only way for that song to get shifted is if we delete it from the playlist entirely because we’re tired of hearing it so much.

Our most played-album achieved that status through a mistake. We accidentally put the entire album into our main “Songs” playlist. So, whenever we played that list (which is a lot), either straight or shuffled, we heard those songs more than we would have normally. Fixing that wasn’t a priority for a few months, so BAM! — that’s the top album by accident.

But never mind — these aren’t bugs or even quibbles; just interesting things to notice.

“The 2010’s wouldn’t have been the same without you,” Spotify Wrapped says, and takes Premium users on a most-played tour of 2013-2019 faves. That’s really fun … in our case taking us back to when The Beatles released that entire catalog to streaming on Christmas Eve, 2015. The band was our Top Artist of the Decade, partly accomplished in the final week of 2015. Reminisce with RAIN’s multi-part coverage:

Rumor Fact(ory): The Beatles to officially stream this week?

Spotify delivers a Your Top Songs 2019 playlist (in Wrapped and in the app). We like that. Looking through Wrapped we wished for a Teens decade list … then discovered in the app that it did exist. Premium users can go to Home, and look for Best of the Decade For You. You should see a section called “Your Decade Wrapped” which includes past annual playlists also.