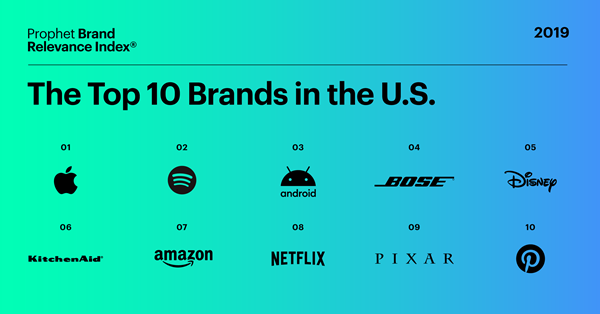 Consulting firm Prophet released the latest results of its Brand Relevance Index, and found that U.S. consumers place a high importance on companies in tech and entertainment. Apple was the top choice, and it has led the ranking for every year the index has been conducted. Spotify secured second place. Several other major tech and media companies landed in the top 10, including Android in third and Amazon in seventh. Google landed at no. 13 and NPR was no. 15. Sonos and Beats by Dre placed in the top 50 for the first time in this year’s assessment.

The index observed a few trends for top performing brands, noting that several leverage a blend of data and emotionally-driven experiences and that they place a focus on escape and inspiration. It also pointed to the top placement of Android while its parent company was notably lower, suggesting that performance and reliability as well as privacy and consumer protection are important to U.S. consumers.