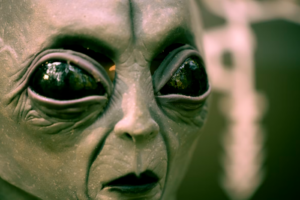 SETI, the institute whose sole mission is the search for extraterrestrial life, has reported the discovery of podcast signals originating from across the galaxy.

The SETI team verified its discovery when they heard a mattress ad coming from a star cluster millions of light years away. “It’s reassuring to know that these alien creatures personally own the mattresses they are promoting, and are getting the best sleep of their lives. This is clearly a species with great authenticity,” remarked a SETI scientist.

That said, none of the discount codes has worked as advertised, the bargain-hunting scientists confirmed. “I didn’t get twenty percent off sh*t,” one furious astrophysicist told RAIN.

Despite such bugs, an international cohort of scientists has concluded that the alien podcasters represent a society far superior to humanity. “These bug-eyed hosts never waste your time with a lot of nonsense at the top of the show,” remarked Impatiens LaGrande, SETI scientist who produces her own show, One Minute Rocket Science.

Earth-based advertisers are taking an interest, but uptake depends on reach and CPM. Industry insiders expect marketers to demand high-level targeting of demographically inconceivable alien listeners, and very low CPMs. Extraterrestrial homeowners with high incomes are especially valuable, according to experts. “It’s not enough that aliens on other planets have college degrees,” said marketing expert C.P. Milieux. “Tomorrow’s galactic advertisers will expect audiences with cosmic discretionary income, gigantic brains, and equal gender representation … if they have genders at all.”

Meanwhile, podcast consolidation is quickly reaching for the stars. RAIN News has learned that Spotify, SiriusXM, and iHeartMedia have all contacted the ET podcasters with acquisition proposals. Given the distant alien location, negotiations are expected to be fairly lengthy, possibly extending until the sun burns out. “We intend to be a first mover in HAA (Human-Alien Audio), no matter the cost,” one company representative told RAIN News. “And blockchain will be part of it somehow.”