Podtrac has released the January edition of the measurement company’s Top Podcast Publishers ranker. (See graphic below.) As always in this ranking, iHeartRadio (#1) and NPR (#2) reside at the top, separated by a small percentage in the key metric, US Unique Monthly Audience. They have flipped those 1-2 slots several times in the past.

Podtrac noted the following key metrics in the January report:

Below is the Podtrac ranking graphic. Scroll down for RAIN’s remix, showing average audience and average streams per active show for each publisher. 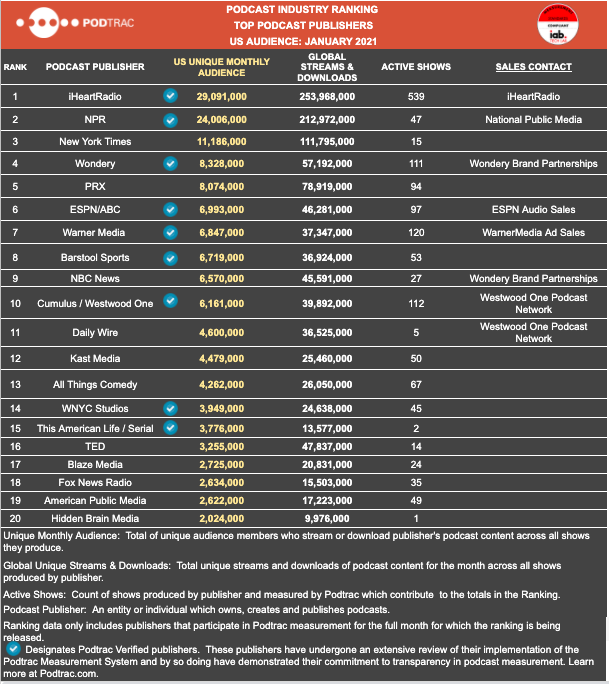 We take an interest in remixing the Podtrac Top Podcast Publishers chart with a consideration of the number of active shows for each publisher. It is clear, on the face of it, that some publishers strategize around attracting a big audience into a small number of shows (e.g. Hidden Brain Media and This American Life / Serial), while others build out extensive networks and spread audiences through a big portfolio (e.g. iHeartRadio).

The following remix has two portions. First, we see a new ranking based on average unique audience per show. Note that Hidden Brain Media soars from #20 to #1 by pulling an average two-million listeners into a one-show portfolio.

Next, we remix the ranking on the basis of average streams/downloads (e.g. plays) per show. Hidden Brain wins this remix too, followed by The New York Times.