Two days after releasing the November edition of its Top Podcasts industry ranking, which showcases the top 20 U.S. podcasts according to Podtrac measurement, the company removed two programs which appeared on the list for the first time — Us Weekly’s Hot Hollywood and Watch With Us!. Both shows are produced by American Media, best known as a lifestyle magazine publisher.

As we reported here yesterday, Podnews editor James Cridland had investigated the seemingly unlikely appearance of the two shows (see Cridland’s post here), and discovered that visitors to the Us Weekly website on Android devices caused background downloading of audio, triggering what Podtrac’s technology interpreted as a podcast play. Enough of these faux plays rocketed Us Weekly’s Hot Hollywood to the #5 spot on Podtrac’s November list.

This is the second time James Cridland has used his Podnews perch to investigate and reveal back-end technicals that could distort podcast download/play metrics and affect the Podtrac ranking. As with American Media, the first instance involved inadvertent audo-dowenloads of audio triggered on iHeartMedia websites, contributing to that publisher’s Podtrac counts. After a remedy was instituted (and after iHeart acquired Stuff Media), iHeartMedia settled into a regular #2 publisher ranking, once appearing in the #1 spot. 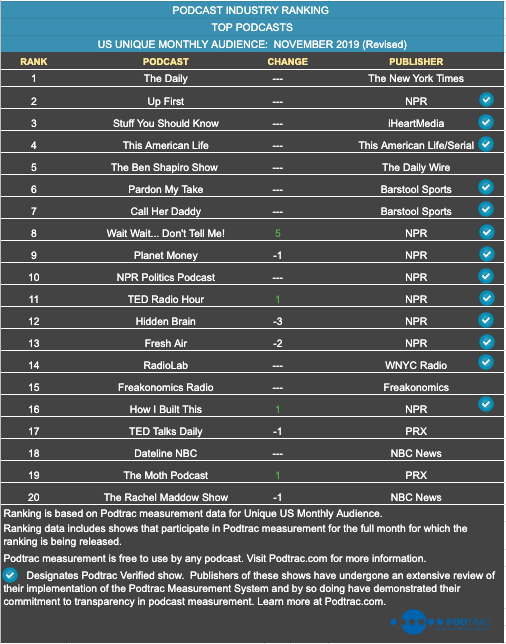 We’ve updated the Podtrac November 2019 Top 20 Podcasts ranking, removing two shows from American Media LLC. We learned today, from some heroic testing from James Cridland of Podnews, that an older version of a website player used by American Media downloads their podcasts without the user pressing play in the specific case of Android mobile users. Preloading content is not consistent with IAB V2 standards. We have removed these downloads from our data.

We looked at the incidence of this player version across all Podtrac measured podcasts, and other than this publisher, 0.1% of podcast downloads came from this same version of the player, and none of these came from the top 2,000 podcasts measured by Podtrac. Podtrac has added this version of the player to our blacklist and has notified the IAB Podcast Technical Working Group to do the same. Going forward downloads from this player will not be included in Podtrac counts.