This article has been updated with new information. See below.

Podtrac’s November 2019 monthly Podcast Industry Ranking features two new titles. A pair of podcasts from American Media made their debuts on the list. Us Weekly’s Hot Hollywood placed fourth, an especially strong showing for an entertainment program in a field that has been heavily focused on news and politics in recent months. Watch With Us! snuck into the top twenty, placing nineteenth.

UPDATE: James Cridland of Podnews dug into the back-end technology of the Us Weekly website and questioned the validity of the Us Weekly placement. (Read his explanation here.) He was motivated to investigate after checking for the Us Weekly’s Hot Hollywood subscription figures and chart placements in Chartable, Castbox, and elsewhere. Cridland found that any visit to any page of the Us Weekly website, on an Android phone, automatically pull down enough audio to count as a play. “It’s nothing deliberate that I can see,” Cridland says. He explains that the faux “plays” seem to result from an old and formally discontinued version of Simplecast still in use on the website.

Here at RAIN we are leaving the paragraph below intact, as it accurately describes the disruption which can occur when a new podcast publisher enters the Podtrac system. That remains true, and Us Weekly’s Hot Hollywood remains an example — even if it turns out that the results must be revised in this case.

These new entries represent an interesting example of how a client-only measurement list can be affected when a new publisher comes into it. Most podcast fans and observers probably do not regard American Media, best known for its slate of niche lifestyle brands (Men’s Weekly, Us Today, Girl’s World and six others) represented mainly as magazines. Us Weekly’s Hot Hollywood, the new #5 below, is a weekly podcast with 57 episodes under its belt.

It was another strong month for NPR, which had eight shows on the ranker. iHeartMedia, which has been challenging NPR for the top publisher in Podtrac’s assessments, placed two shows on the list, as did Barstool Sports. The New York Times’ weekday news show The Daily held onto the #1 crown for another month. 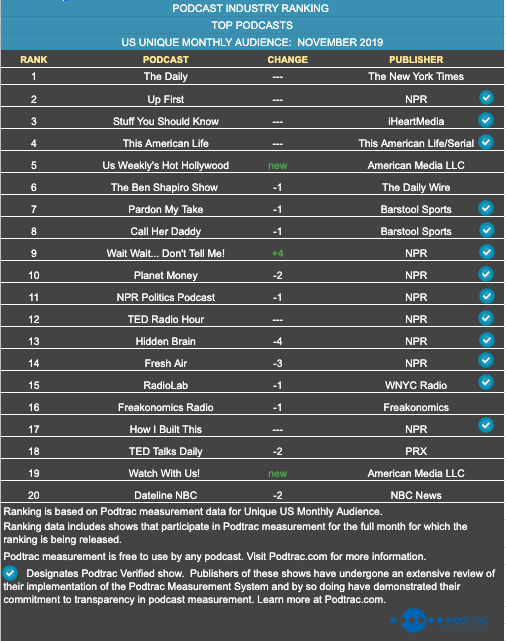