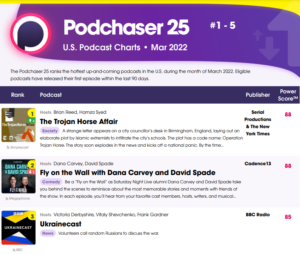 Podcast database and social listening platform has released the third edition of Podchaser 25, a March ranking of podcasts which are exhibiting spikes of popularity. Podcahser calls the list “a first-of-its-kind monthly ranking of the hottest, rising podcasts in the U.S.”

The ranking is based on metrics gathered in a 90-day period. The ranking method is based on something called Power Score, a proprietary measurement of a podcast’s influence. The Power Score is formulated with 30 different metrics like audience size, subscribers, and cross platform presence. Through affiliations with podcatchers, the Power Score factors in listening data from millions of devices.

Podchaser notes that the Podchaser 25 ranker is not a measurement of clients, like many high-profile success rankers created by measurement companies. So, in theory at least, any podcast which is distributed openly via RSS is eligible to appear on the list.

Podchaser told us, “The Podchaser 25 showcases the top 25 podcasts released in the past 90 days.” We asked whether all ranked shows are new releases within that period. “Predominantly newer shows” was the answer.

The list is a downloadable PDF HERE. It’s too bulky to post here, but here are the top five (we note that two of the five were in the February list):

Fly on the Wall with Dana Carvey and David Spade (Cadence13)

The Rest Is Politics (Goalhanger Podcasts)