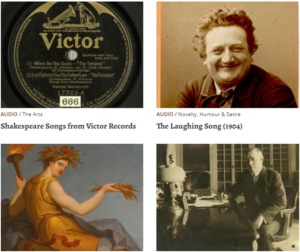 Before this year, no music recording has ever resided in the public domain under U.S. federal copyright law. Why? Two answers: First, music copyright in every era is arcane and complicated, and second, recorded music copyright has been poorly administered across decades.

More on that below. For now, as of January 1 the situation has changed: Any recording made before 1923 is in the public domain now, and can be freely used. Despite our headline, there probably isn’t much applicability to podcasters in this, except for some historical shows. But an estimated 400,000 recordings are liberated this year, and if nothing else, they make a fascinating representation of the nascent recording industry.

Here are a few repositories for exploring: 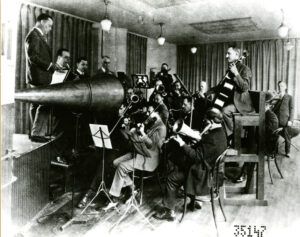 All of this newly available audio history is from an era between 1877 (Edison’s “Mary Had a Little Lamb” recitation into his newly invented phonograph) and 1925, when the electric microphone was introduced. Before the mic, recordings of the “acoustical” era were made by capturing sound directly. Although the technology was primitive, the industry was starting to bloom. The home phonograph became a mass market consumer device by 1920. Classical and ragtime were two important commercial genres, and there were many niche and esoteric recordings also.

The stage was set for the pre-1923 trove by the Music Modernization Act of 2018, which liberated the recordings into public domain as of this year. This big release, covering decades of the rudimentary record industry, was the first step in reorganizing usage rights to old records. Going forward, there will be an annual drumbeat of new public domain releases. The formula is based on 100 years of copyright protection. So, records issued in 1923 will fall into public domain next year.

In this scheme, The Beatles’ Rubber Soul could start soundtracking podcasts in 2068. Something to look forward to.