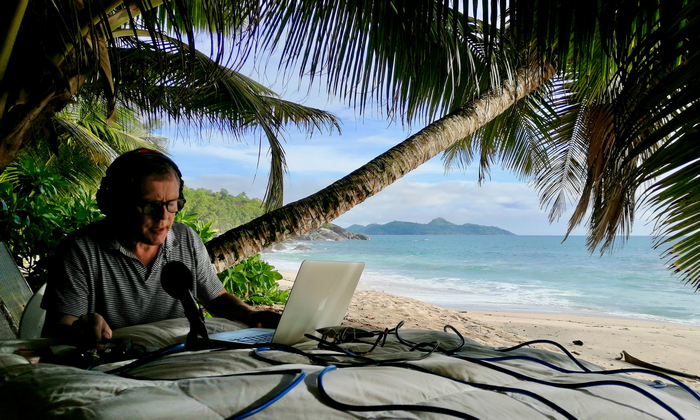 Podcast Radio, the UK DAB+ venture which programs podcasts 24/7, has notified us of a new and original fiction podcast starring former BBC announcer Patrick Muirhead. The show is described as “a series of fictional mystery stories set in the remote tropical island paradise of Seychelles where [Muirhead] now lives.”

The Mahé Mysteries are inspired by real events beginning with the discoveryof several human skulls around the island which leads Muirhead to  uncover a series of deadly family secrets.

As Podcast Radio celebrates its first birthday, the 10-part series will air next week (from Monday 15th February) and will be released as a Podcast Radio Original podcast series on all major platforms shortly afterwards.

Muirhead, who works for Seychelles Broadcasting Corporation as a TV journalist, says he wrote all the episodes over a two-week intensive burst of activity: “This is my first attempt at fiction and story-telling. A novel is planned but for now I wanted to use my radio skills to put together a podcast series. Podcast Radio snapped it up.”

Muirhead read and recorded all the episodes on location on the beach in front of his home in the middle of a coconut plantation on
Mahé Island. He reportedly is working on his next series.

Podcast Radio director Paul Chantler says: “We loved the story. Not only is it a clever work of fiction, based on fact, with lots of plot twists and some dry humour, but it really puts over the exotic feel of Seychelles. When you listen to these podcasts, you really feel as though you are there.”

This show is the second original produced by Podcast Radio.