You might expect an iconic news organization to present its earnings call with a certain journalistic flair. So it was that Meredith Kopit Levien, President and CEO of the NY Times, opened her company’s Q4 earnings call this week: “2020 was the year none of us could have imagined. The pandemic, its devastating human toll, and its many economic reverberations and national reckoning of a race and social justice, a bitterly contested US presidential election, and an unending hunger for relief from it all.”

If there was a counterpoint to that weary sagacity, it could have been the $36-million that the Times earned from its podcast properties in 2020. That is up from $7-million the previous year — a nearly 300% revenue uprising. It was all powered by an expanding portfolio of audio programs, led by The Daily morning news show, often ranked as the most successful U.S. podcast. And not to forget — the Times acquired Serial Productions in July. 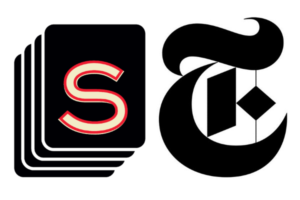 “We expect podcast revenue growth to be strong into 2021,” Levien said, “as we continue to see steady demand for the daily and our other shows, and as we benefit from our acquisition of Serial and the rights to sell advertising against This American Life.” (This American Life, while allied with Serial Productions, was not part of the acquisition.)

Audio is one of the two biggest growth drivers, according to Levien; the other is what she named “first-party targeted media.” On the audio side, podcast production is obviously important. Worth noting also that the Times acquired Audm, the article narration company which offers a consumer subscription service. Some Audm narrations are released to non-paying public; notably The Sunday Read which is an extension of The Daily‘s feed.

All of this audio prospecting is against a backdrop of digital supremacy on the NYT’s finance sheet. In 2020 digital revenue on the whole (including not just audio but also digital subscriptions to the New York Times) overtook print revenue. Digital subscriptions are now the largest revenue bucket, Levien said. “Those two milestones, and our best year on record for subscription, mark the end of the first decade of the Times’ strategic transformation to a digital first subscription first company.”

Accordingly, she stated an intention to hire deeply into digital product teams and data scientists to innovate new digital products for subscriber engagement. “A close look at the investments we made last year gives you a picture of our emerging plans in three areas,” Levien said. “News, product work, and stand-alone products.

Encompassing the digital glory, though, 2020 proved tough on the entire ad business for the Times. EVP and CFO Roland A. Caputo noted that total advertising revenues declined about 20% in Q4, largely due to lower market demand for print during the pandemic. Digital advertising declined by two percent in Q4.