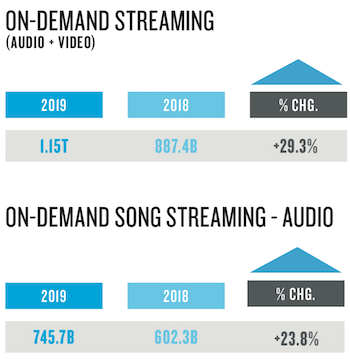 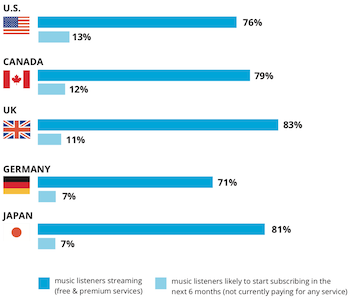 Nielsen also shared some demographic details about music consumption during the year. Teens have been heavy adopters of streaming and other digital tools. More than half (53%) of teens’ weekly share of music time came from streaming, compared with 41% for the average music listener. Social media is key for teens’ music discovery, with 31% using the platforms for that purpose.

The report also offered some global statistics, with analysis of key markets UK, Canada, Germany, and Japan. Nielsen noted that physical formats are still popular in the latter two countries, with 35% of German respondents intending to purchase physical music in the next six months and 47% giving the same answer in Japan.

The UK had the largest share of music listeners using free and premium streaming services at 83%, and 11% of current non-subscribers likely to start subscribing in the next six months. In Japan’s audience, 81% are streaming but only 7% expect to start paying soon.