Finance institution Citi has released a research report on the global music industry that is garnering headlines in the music press and sparking social media conversation among musicians. A comprehensive whitepaper and flow chart of music revenue was authored by a six-person international team representing the internet, entertainment, media and research divisions from the U.S., Europe, and Asia.

Titled PUTTING THE BAND BACK TOGETHER; Remastering the World of Music, the project is freely available HERE.

The headline metric is that musicians receive only 12% of the total revenue flow of the global music industry. While that is sparking social complaints about streaming and the internet generally, the report gives a broader account of things. The 12% number is actually risen from past years, and the total revenue pie is growing too — reaching a peak in 2017 not seen since 2006. But the Citi team does designate its 12% as a problem in need of a solution. According to the research, the explanation for both the rising percentage of money going to artists, and a solution for the future, lies in live events — a growing segment of the music industry which is higher-margin for artists than recording income.

The global music industry is structurally unchanged from the artist perspective, according to Citi’s report. The 12% percentage of money filtering through to the musician is actually and substantially on the rise. The reason is that with recorded music sales dropping, musicians are touring for concert revenue more, which is a higher margin activity separated from structural costs of distribution.

As such, the report advocates for the emergence of more direct artist-to-consumer models that would reduce the expensive music industry machinery that is traditionally an intermediary. 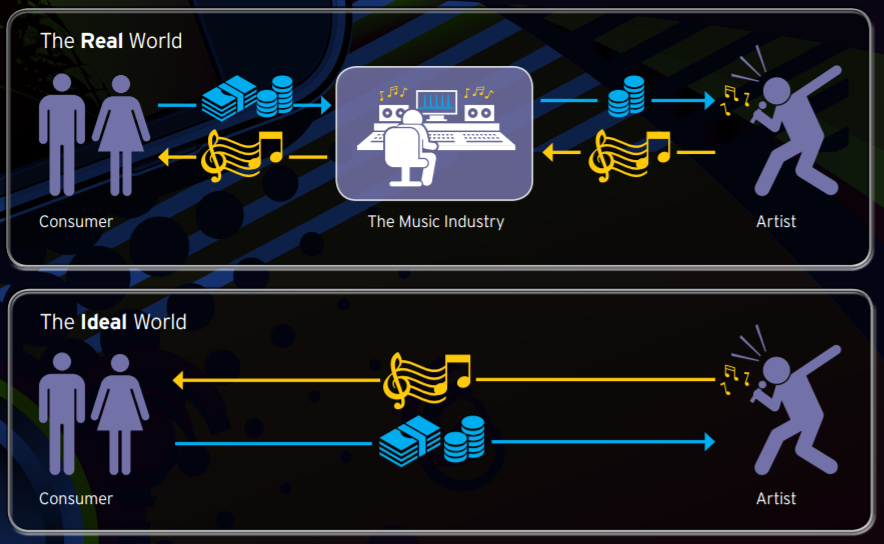 This paper is an exceptional documentation of the music industry’s ecosystem, including a substantial section of research and metrics which teases apart the economics of the music management business.

A history of copyright goes back to the Statute of Anne and roams up through detailed flow charts of non-interactive and interactive streaming. It teases apart royalty regulations, and the separate realms of music creation and sound recording — keeping in mind that this is a global report, covering legal principles that vary across territories and governments. Spotify and Apple music act as global examples, and Pandora is represented as the largest U.S. non-interactive service. On page 27 of this 87-page report, Citi speculates about how the U.S. Copyright Royalty Board set disparate rates of mechanical royalties for downloads at $0.901, and the rate for streaming at 1/30th of that level ($0.0003). That level of detail permeates a dense and deeply informative treatise.

The royalty section is one part in this exhaustive tutorial of the music business ranging across continents. On the streaming side, Spotify financials are examined, immediately followed by a section laying out the anatomy of China’s major streaming services — the two largest of which, Kugou Music and QQ Music, each serves over 200-million monthly unique users. (Compare to Pandora’s 71-million in the U.S., or iHeartRadio’s 120-million registered users.) YouTube is analyzed for both its copyright model and the taxonomy of its Content ID platform which identifies unauthorized uploads.

Part 3 gets to the concert business, which Citi asserts is driving the growth of revenue to artists. The value chain is laid out schematically: 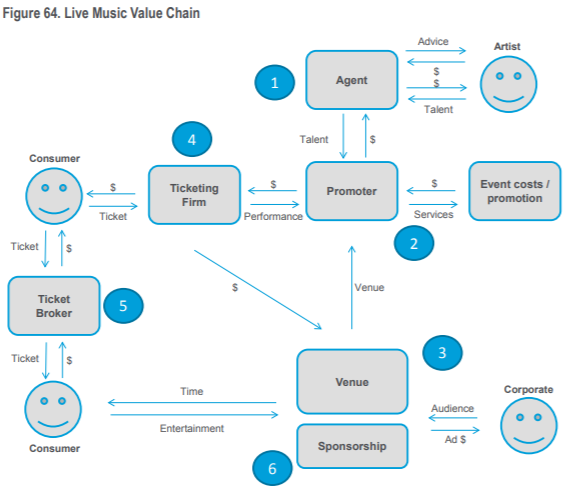 Interestingly, the report produces a profit-and-loss scenario for the concert business and its many stakeholder splits. The main point is that artist share can be significantly higher than the global 12% of the the total music pie which filters to musicians.

“So far, we’ve reviewed quite a bit,” the report modestly notes on page 67 as a preface to industry projections. In brief, these are Citi’s ten predictions: