Edison Research has released a research nibble from the company’s ongoing Share of Ear consumer research, as it does from time to  time. This one is a measure of Americans’ keenness to pay for audio via subscription. That number is 47%, up  from 23% in 2015. 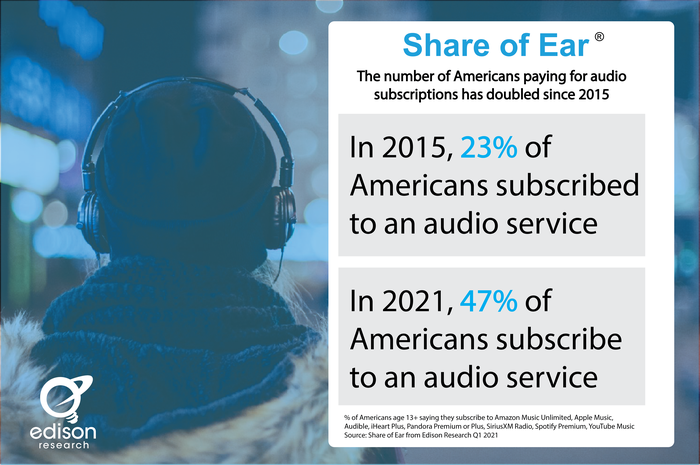 “Growth has come across the board,” Edison observes, including music services, SiriusXM, and Audible subscriptions. Podcast subscriptions are not mentioned, and perhaps did not factor much during the survey fieldwork. But with some of the world’s largest podcast brands participating in Apple newly released Apple Podcasts Subscriptions program payment for podcasts might start adding to the general subscription number Edison is tracking.

There’s another potential future source, as predicted by Edison Research President Larry Rosin: “While much of this doubling of the numbers is the redirection of money that was going to physical music formats to music streaming subscriptions, there is also the trend of more people paying to avoid commercials,” said Edison Research president Larry Rosin.  “I have to believe that we will see more subscription efforts in the future, particularly from radio companies.”