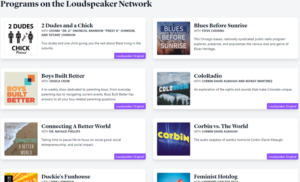 If you don’t live in northern Colorado you’ve possibly not heard of NoCo FM, a digital media outlet featuring regional musicians. After expansion to include some California voices, the company has rebranded as Loudspeaker. (Not to be confused tieh The Loud Speakers podcast network.)

The renewed company is pursuing three lines of execution: podcast networking, streaming audio, and at least one (upcoming) live event. In a press release, the main emphasis is on the podcast network aspect. As  of relaunch, shows included in the Loudspeaker portfolio include:

On the event side, Loudspeaker is preparing HallowStream on October 31 (get it?), featuring music from Donny Blot, James Lopez Magic, Monalicious, Plasma Canvas Retrofette, Saints of Never After, Sarah Christine, Shelby Taylor, Simon Hyperion Presents: Drag!, Sugar Britches, and The Mazlows — all of them from Colorado. More info about that HERE.