Magellan AI has released its always interesting Top 15 Advertisers reports. One is “Movers and Shakers” (greatest increase from the previous month), and the other is top advertisers overall by spend. Magellan is a podcast advertising intelligence company that generates these reports in what it describes as “proprietary methodology to generate estimated spending numbers for every advertiser detected.”

Joe  Biden’s political campaign moved into podcasting in September, spending $163,000. That is a penny in the pond compared to the established big buyers in the space. In contrast, the top overall advertiser, online therapy service Better Help, piled in five and a half million bucks in September. Therapy is clearly more lucrative than politics.

Hobspot was the top “Mover and Shaker.” Magellan’s commentary: “For a company that has seen such success and continued growth during a global pandemic, it comes as no surprise that Hubspot has also stepped up its advertising on podcasts. In fact from August 2020 to September 2020, Magellan AI detected a 580% increase in ad dollars spent.”

Other newcomers to podcast advertising (at least, compared to August) were The Pennsylvania State University, Twilio, and FX.

Here are the top 15 advertisers overall: 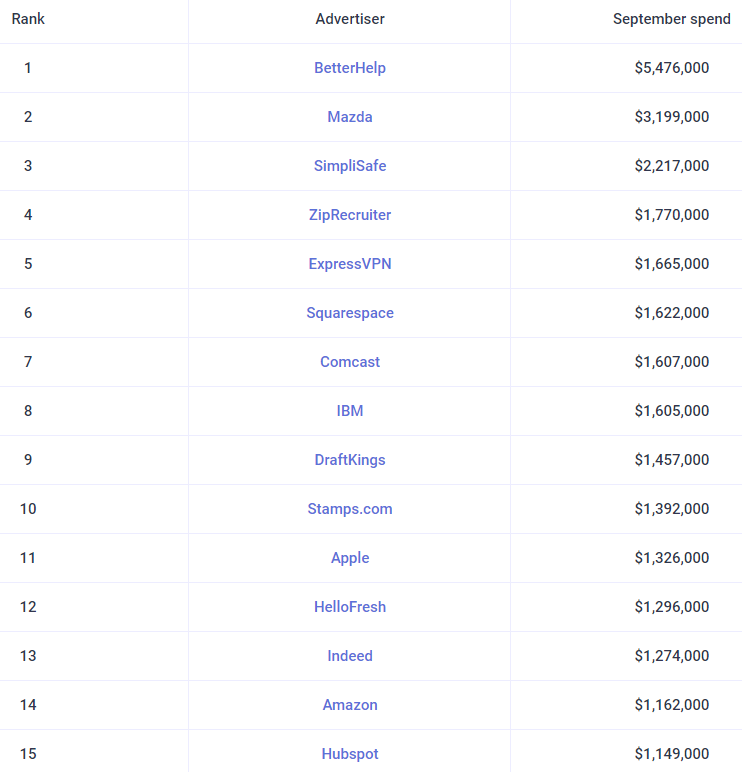