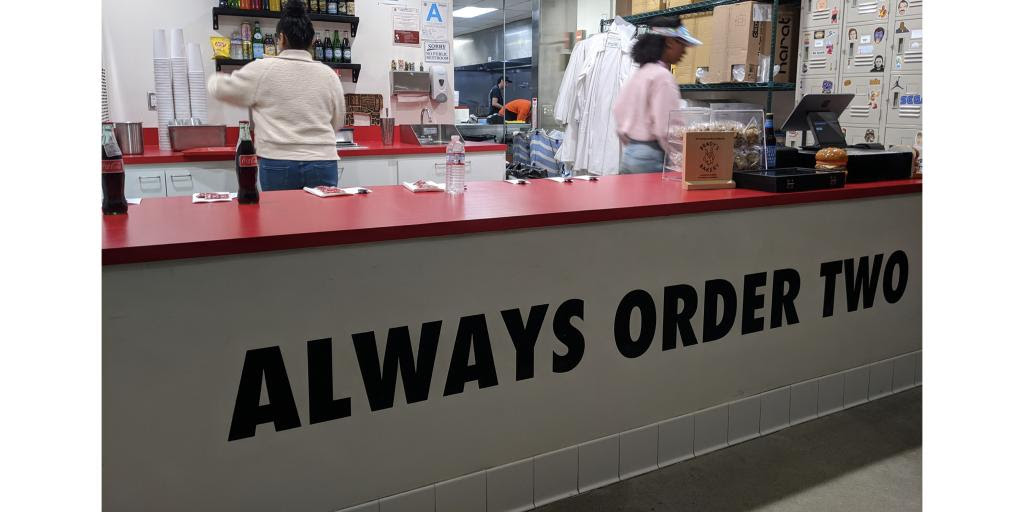 Above: “Always Order Two”, the sign under Burgers Never Say Die, a burger joint in north Los Angeles. I went with three Canadian friends. We all followed the marketing suggestion, and ordered two. Either this is genius marketing, or we’re all terribly polite.

One of the best things that Radiocentre is doing in the UK – and they do plenty of great things – is to fight pointless pieces of legal nonsense. In this particular case, they’ve managed to successfully lobby to remove a lot of the “Ts and Cs” for advertising in the automotive sector: like the pointless “Over 18s only” when offering credit on a car. Congratulations to them for doing this.

As an example of how bad it is, here’s 24 hours of a UK radio station – LBC, in this case – with everything edited out except the terms and conditions. They add up to 5% of the entire station output.

UK radio should count themselves lucky they’re not following Australian law, where “in order to help consumers”, ads for builders must legally include a QBCC licence number (“QBCC 1111495” as one example); radio competitions must mention their Trade Promotion Permit number, which differs per state (for 2day-fm, their usual one is LTPM/19/05152), and that’s just the tip of the T&Cs iceberg. Broadcasters the world over should learn from Radiocentre.

That said, many of the T&Cs are put there for no real reason whatsoever, I can tell you as a former advertising copywriter. Lawyers are, by nature, risk-averse: and would rather cover themselves by pointing out that a packet of peanuts “contains nuts” than run the risk of someone assuming that it actually contains legumes. Which it does. But… never mind.