The Infinite Dial 2021 UK study came out. I mentioned last week why I was excited about it, and it didn’t disappoint. There’s a 60-page PDF and a video presentation on Edison Research’s website. 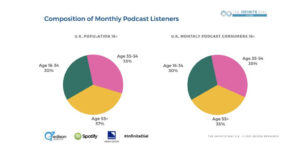 For radio, weekly listening in the UK is higher than any of the other Infinite Dial countries of Canada, US and Australia. It would be interesting to speculate quite why – is it the existence of a strong and well-funded public service broadcaster? None of the other surveyed countries have a public broadcaster even approaching 25% weekly market share, much less the 50% that the BBC enjoys.

For podcasting, 41% of people in the UK (16+) listen to podcasts every month, which is the same number as the US; and the weekly figure is 25%, a little lower than the US’s 29%. To me, that’s about right in terms of gut-feel.

One of the challenges of podcast measurement in the UK is the existence of “listen again”, offered in the main by the BBC and Global. This is, typically, access to a radio show on-demand: different for a radio broadcaster in terms of rights costs, but indistinguishable from a podcast for the consumer. RAJAR collects and reports them as distinct things in its research (because it’s owned by the radio companies), and you would presume this must lead to some confusion. I can listen to The Archers as a piece of listen-again radio, but I can also listen as a podcast, after all. I dearly wanted to merge those while working for Pure in 2010, but it wasn’t to be.

Incidentally, this research also says that 22% of people in the UK say they don’t own a radio. That’s more than one in five.

Adam Bowie has written a good write-up, with a lot of detail. Adam’s post, like the study itself, is well worth a read.

Christmas, as anyone who’s had the pleasure of being on-air on Christmas Day morning knows, is a time when listeners particularly love listening to their friends on the radio. So many telephone calls on Christmas morning, and radio presenters can break format and be a companion to many, especially elderly people who can be otherwise lonely and depressed on what we’re told is a special day.

However, this year, “Local BBC Radio” is sending their listeners to Coventry, quite literally – taking a religious ceremony from Coventry Cathedral on Christmas morning. (There’s a similar service on BBC Radio 4 that morning, another on BBC Radio 3 in the afternoon, and two hours of gospel on BBC Radio 2 in the morning, but that’s clearly not enough, so listeners to BBC Radio Cumbria will enjoy a service from 245 miles away).

It’s not just Christmas morning – “Local BBC Radio” – all of the stations – will also be playing clips recorded at BBC Radio London of Ed Sheeran (born in Halifax, West Yorkshire), some clips recorded in London by Katie Melua (born in Kutaisi, Georgia), a network show called “Together for Christmas”, where BBC Radio Humberside listeners will enjoy a family from Cornwall doing a zoom call with some faraway relatives, and a concert with the BBC Philharmonic Orchestra and two childrens’ puppets in the shape of dogs called Hacker and Dodge, scheduled at, er, 9pm on Christmas Eve. (Top Gear will be on the telly.)

The BBC already operates ten national radio services, but they not only seem to want “Local BBC Radio” to be, er, not local at all; they also appear to have forgotten the very point of it.