Last week, someone sent me an email with a ‘future topic idea’ – “how many radio receivers do we own today, versus 50 years ago?”

I asked my correspondent: “do you mean radio receivers? Or things that let you listen to radio stations?” 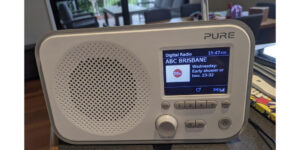 A DAB digital radio. But how many radio receivers do we own?

His point was that there are lots more radio receivers and bits of radio technology than ever before in devices. Which is true. Bluetooth chips (which broadcast at 2.45 GHz) normally contain FM tuners as well; and wifi (2.4 GHz and 5 GHz) is almost ubiquitous. My home is blanketed by radio transmissions and receivers, enabling me to connect them to the internal network, and from there, the internet.

However, there’s some research to suggest that the amount of radio receivers – things that are capable of picking up the analogue transmissions of 99.7 The Wombat – are on the decline. In 2020, the Infinite Dial from Edison Research reported that the average home has 1.5 radios, down from 3 in 2008. And, almost a third – 32% – claim that they have no radio receivers in their home at all. (That number was 4% in 2008).

Streaming is now 12% of all traditional radio listening in US. (In early 2020 it was 14% in the UK; I don’t think Australia releases an online breakdown).

My definition of radio – an audio-first shared experience with a human connection – is deliberately platform agnostic for a reason: because many people are no longer using a radio to listen to the radio. And there’s nothing wrong with that.