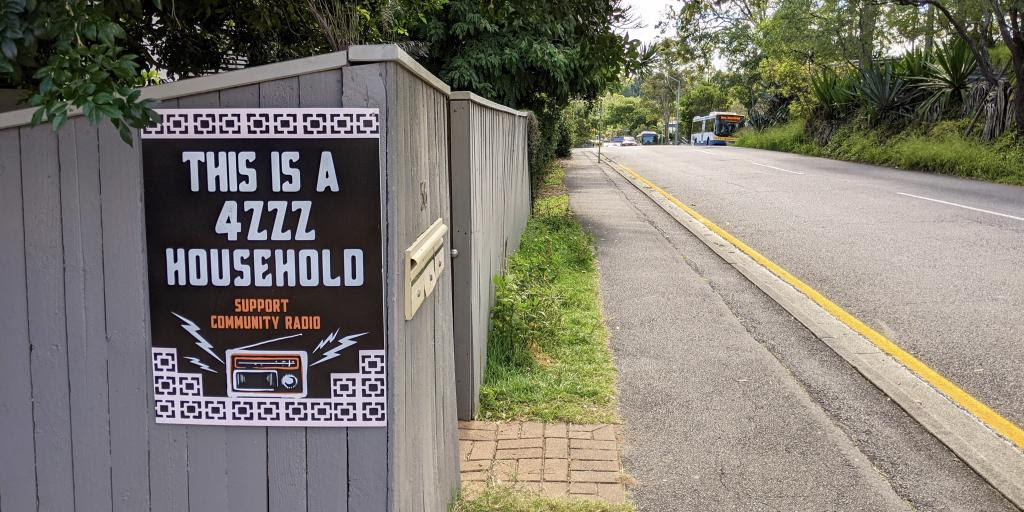 Above: out for a walk round the neighbourhood recently, I happened upon this proud-looking sign. 4ZZZ, an alternative music station, is a curious listen at any time of day, and is currently in its radiothon fund-raiser. And here’s a podcast about their history ▸.

Terry Wogan, a popular UK radio broadcaster, used to say that he only ever spoke to one person when he was on the air. Any radio programmer will tell you that the language that you use on-air is incredibly important. Steve Martin, the best programme director I’ve ever worked for (at The Pulse in Bradford), was especially picky about the phrases you used and the way you said things. What sticks in my head is an observation one day that “The Pulse’s Elliot Webb” was fine, but “Elliot Webb from The Pulse” was much less clearer.

So it’s really exciting to see research released by Spotify about language and pace. They took more than 5,300 podcast episodes, transcribed them all, and compared playback data for them all: a significant amount of data to do a proper amount of academic research on language in audio.

The full paper, available here as a PDF, is a really interesting read. They discover that exclusive words like “he, they, her” perform worse than inclusive ones like “we, you, my”. Positivity works better than negativity. Swearing, but also “um, er, oh, right, cool” type filler words, appear to harm a podcast rather than help it. And high-engagement podcast creators seem to speak relatively fast, too.

It’s stuff that doesn’t come as a surprise to many people in radio: but I’ve never seen as much data behind these assertions as exist here. A fascinating, if difficult, read that links to other research.

The clever folks at RadioAnalyzer have seen similar with radio streams, they tell me.

I’ve always been cautious about the claim that I see many giving about broadcast radio and TV being “so much more resilient than the internet in a time of emergency”. That’s fine: but it isn’t always true: if you’ve one big point of failure, occasionally, it fails.

A fire in Bilsdale on the North Yorkshire moors wiped out TV, FM and DAB broadcasts for more than a million people. This is one time where the UK’s policy of co-locating transmitter sites is an Achilles heel.

For television, Bilsdale fed a number of repeater sites, including Whitby, where they’ve switched to an emergency pre-multiplexed satellite feed which contains London programming.

Meanwhile, the this BBC News report is to be admired. It claims that “BBC TV channels” are back on for many (I understand there’s a temporary, low-power transmitter on-site), and that “BBC Tees FM is also back on air”. Not a single mention of any other broadcaster. Independent and impartial, as long as it’s not a story that contains its competitors! It reminds me of the glorious days when the BBC ran its own ‘trusted’ and ‘impartial’ internet search engine, where a search for “Classic FM” returned entries for BBC Radio 3, its competitor – a bug, of course, not on purpose, oh no.

In any case, I recommend an hourly reminder of all (or at least some) of the plaforms any radio station is available on. “On your mobile, on 96.9FM, on DAB Digital Radio and on Sky, this is MultiPlatform Radio”. At the very least, if one of them falls over, your listeners know they can still listen.

One of the cleverest things that UK commercial radio company Global did was to buy into the outdoor advertising market. It can use unsold inventory to promote other parts of its business: this, for example, showing their ongoing coverage for the Capital Weekender Live. (It’s also, of course, capable of building this into the sponsorship package.)

Primesight, one of the outdoor advertising companies bought by Global, was once owned by the parent company of the original Virgin Radio – alongside cinema ad company Pearl & Dean. In those days, it was expensive to produce and paste the posters, even if you could get the placements – now, with electronic billboards in many places, it’s rather simpler to make the best out of cross-promotion activities. Technology has made cross-media ownership much more efficient.

Outdoor advertising has historically been quite bouyant, though I imagine the last 18 months has bucked that trend. Ordinarily, outdoor appears to follow different trends than broadcast radio advertising: and interesting that “radio + outdoor” is a thing in many different countries. In Australia, APN News & Media owned both ARN (radio), APN Outdoor and AdShel. The US, of course, saw ClearChannel own both radio and outdoor; in Canada, Pattison owns many radio stations as well as outdoor. I’m sure there are plenty more examples.