Fascinating to watch TalkTV, a new TV channel I wrote about last time. It launched on Monday. The channel is, essentially, a visual simulcast of radio-first shows from TalkRadio, with a few hours a day of TV-first shows made for Murdoch-outlets around the world. 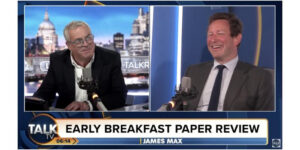 I tuned in at the end of the repeat of Piers “Moron” Morgan, at around midnight. His show is also being shown on Sky News Australia (which, unlike Sky News UK, is owned by Murdoch), so that’s presumably why TalkTV is blocked in Australia; but trivial to get round the geoblocking.

Moron’s show looked very slick and built for US television – an expansive and wholly-unnecessary 360-degree camera shot at the end showing off the custom-built studio at Timeline TV in Ealing.

Then (I was watching on YouTube), via some trailers and promos, and an entertainment news update and the weather for some reason, and I was watching Petrie Hosken (LBC, BBC Radio London) “on TalkTV from the TalkRadio studios”, doing what might even have been her first show for the station. She was very good, and I suspect we were treated to the first delay-dump of TalkTV’s existence, when everything went mysteriously grey and fuzzy for a few seconds in the middle of her first call, during which the call (which was critical of the station) miraculously disappeared. She then mentioned that the phones weren’t working well, and a bloke called Nick Ellerby suddenly appeared to talk to Petrie with a slightly comma-superfluous headline, and no action on the phones until 48 minutes in. Ellerby is a newsreader: I wonder if he was on reading duty on TalkRadio? I’d like to hazard a guess that the delay reset procedure didn’t work quite as planned – but the recovery was slick.

The “radio as TV” works well – it’s something TalkRadio have been doing for some time, so they’ve got very used to the experience. It sounds great – decent microphones are in-shot, rather than weedy-sounding lavaliers. The radio studio is well lit and looks good.

(Cleverly, they simply rebranded the TalkRadio YouTube channel, incidentally, so start with more than a quarter of a million subscribers. Here’s the live stream. A VPN is your friend.)

As a way to run TV and radio output as one service, it works very well. It isn’t a rolling news service, though – it wouldn’t work, as well, for an amalgam of (for example) BBC Radio 5 Live and BBC News channel. However, during the pandemic, ABC News channel and ABC News Radio ran some simulcast programming which worked with some editorial thought; and 5 Live does also simulcast some BBC TV output.

It’ll be interesting to see how it does in terms of audience. TalkRadio reaches 542,000 people a week, says RAJAR; GB News reaches 1.15m people a week (using the C7 TV set for the first week of December), says BARB. Is it a better watch than GB News? Quite possibly.

Clever tech: do you know any?

I’m speaking at Radiodays Europe in Malmö in a few weeks, and after hosting the podcast summit on the Sunday, I’m speaking at the conference about clever tech for your radio station. I plan to talk about audio editing software that makes editing quick and easy; the syndicated show that syndicates itself using its own playout system; a way to get your on-air talent speaking new languages; a podcast that never goes out of date; and plenty more. If you know of something you feel is interesting enough to go alongside these, I’d be grateful to know of some. Do hit reply.

It’s all because I tweeted

If there’s anything else anyone would like the BBC to fix, do let me know – I just have to tweet, apparently.