The BBC announced that it is to “trial” a windowed removal of open podcasts, making some radio-derived podcasts exclusive for 28 days within the BBC Sounds app. Shows include In Our Time ▸, which was the corporation’s first podcast in November 2004, and topical shows The News Quiz and The Now Show, within Friday Night Comedy ▸. This ain’t the BBC’s first rodeo; they have previously blocked Google Podcasts altogether, and pulled streams from TuneIn in the UK. 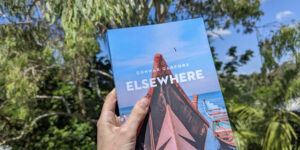 Above: a book by a radio person but not about radio. Gunnar Garfors (who works for NRK in Norway) writes with some passion about some of the lesser-known spots to travel to. Lovely book.

Bauer has decided its live stations in the UK (Absolute Radio, Magic, Kiss) will no longer be streamable on TuneIn, making its stations exclusive to its own apps. Listeners on services like TuneIn are already hearing prerolls telling them it won’t work for too much longer. *

The BBC’s plan restricts access for audiences – or, in the press-release’s Orwellian doublespeak, “gives licence fee payers even more value” by bullying them into a space where the BBC can relentlessly market other shows to them and track their every move. It’s another disappointing move from a broadcaster that should be widening its potential audience, not limiting it.

Bauer’s plan restricts access for audiences even further – and their press release is pretty clear that the only reason they’re doing it is for ad targeting. Drive a Tesla, where the only streaming option is TuneIn, and you’ll have to hope that you’re in broadcast coverage of the radio station you want to listen because you’ll not get it online any more. Up to them; they’re a commercial radio station, and if they feel it better to get fewer but better-monetised listeners, that’s their look-out, I guess.

Other broadcasters are also playing with exclusivity; but the other way round.

In Norway, NRK is removing archive content from third-party platforms. Podcast episodes that are older than a year will be taken off open RSS feeds.

Radio France does something similar, with the last month’s worth of episodes available on Apple Podcasts (like Toute en vie), but the rest in the Radio France app.

An archive plan makes sense to me: deep archive content makes sense to make available in a curated place; and listeners wanting your archive are likely to be your “preference-one” listeners in any case. There is benefit in leaving archive content available for SEO, of course; but if you’re looking to drive installations of your app to those that really want it, archives seem a good gateway.

NRK and Radio France aren’t alone: This American Life ▸ only posts the last ten shows on their open RSS feed; and one of the monetisation options for Answer Me This! ▸ was to sell access to “classic episodes” on their website.

A streaming radio app (I launched the world’s first) isn’t ever downloaded by someone who just wants to trial a radio station. It’s for your preference-one listeners, who want a closer relationship with their favourite stations.

In an age where radio consumption is in slow decline in many parts of the world, I’d suggest that anything that removes opportunities for listeners to discover new stuff is regrettable.

* Bauer isn’t that stupid; their streams will still be available in the UK’s Radioplayer; a product they’ve never promoted but clearly sees some benefit from.

Last week I wrote about news on the radio, after Liza Tarbuck last week wanted to stop the top-of-hour news in the middle of her show.

(For context – here is Liza Tarbuck’s introduction to the news on Jan 22, poorly fading down some stripper music, for some reason, and then shouting an incomprehensible “funny” version of the station’s top of hour positioning statement into the news bulletin so loudly that it distorts the microphone. Good radio this isn’t.)

“Capital M” tweeted a link to his blog about a radio station in South Africa which starts their news bulletin with something positive. He writes, in 2008: “When I tuned in to sample it myself, the top story was about people being thanked for their outpouring of support following wildfires”. Indeed; and note that the wildfires were still the top story.

And Richard Horsman remembered the password for his blog (it’s been two years!) to suggest that the news isn’t a nuisance; and dismissing what he describes as ‘Pollyanna demand for positive news’. He adds: “It appears to be something people like very much in opinion surveys but don’t actually read or listen to in any great numbers.” – I’d suggest that there’s a definition problem here; and were we to cover positive aspects of the same stories rather than the negative, things might sound a little better – but Richard’s the experienced news journalist, not me. (And he also gave me my first weekday job in a radio station, for which I remain grateful).

Also last week, RAJAR figures came out, and MIDAS, the platform report. Adam Bowie does his usual forensic look at both. As Adam points out, there’s plenty of change, with mid-mornings now beating breakfast on a number of large stations.

On the positive side, the UK reported its biggest-ever audience. So did Commercial Radio Australia, also claiming a record (commercial radio) audience. Thank heavens for a growing population!