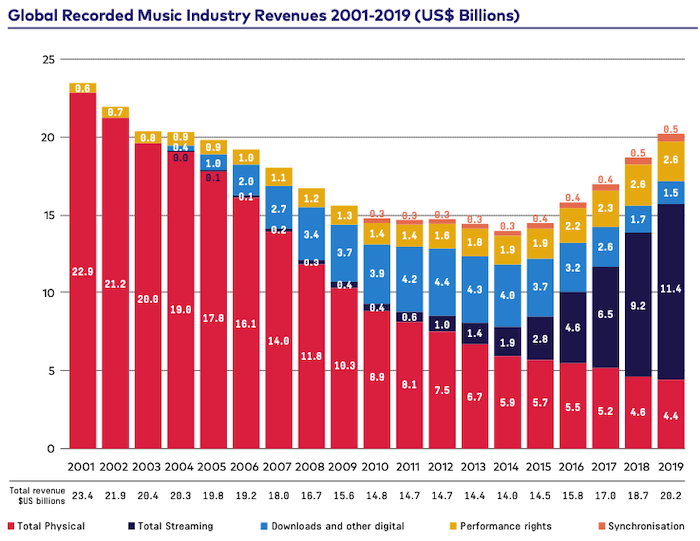 The IFPI has released its annual global music report, offering a look back at the results for an increasingly international industry over the course of 2019. As we’ve already seen in so many individual markets, streaming is continuing to secure growing shares of the music market. It was responsible for more than half of the global revenue in 2019, according to the IFPI’s results.

Global revenue grew 8.2% over the course of 2019. The fifth consecutive year of growth closed with $20.2 billion in annual revenue. Streaming metrics drew even larger percentage increases in many areas. Overall streaming revenue increased 22.9% to a total of $11.4 billion. That’s more than half (56.1%) of the global total for the first time. Paid audio streaming subscriptions saw an even bigger annual spike of 24.1%. The IFPI found that there were 341 million paying music subscribers by the end of the year, up 33.5% from the paying audience in 2018.

Most other formats saw declines in the IFPI assessment. Downloads and other non-streaming digital revenue fell 15.3%. Downloads are now responsible for just 5.9% of the total global market. Physical revenue dropped 5.3%. These formats hold a 21.6% share of the global music industry. However, the IFPI found that a few key markets, including the U.S. and Spain, saw small increases in physical format sales during the year.

The U.S. and Canada are the largest region in terms of recorded music revenue, and the duo still saw 10.4% growth from 2018. These markets are increasingly digital, with those sources responsible for 77.8% of the market. The 2019 report found little change at the top of the regional markets. The top ten music markets for last year were the same as in 2018, with Australia and Canada switching places in the ranking.

Latin America emerged as a region to watch, thanks to an 18.9% overall revenue increase and a high impact for digital listening, which represented 74.6% of the market. The listening habits in Latin American nations appear to be following a similar trajectory to Latin music within the U.S.