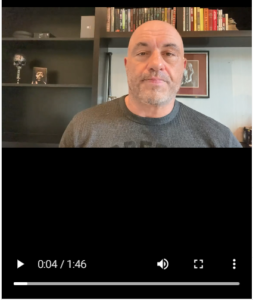 In an Instagram video, Joe Rogan — the world’s most successful podcaster, by consensus and most measurement — announced that a member of his production staff has tested positive for Covid. Production of The Joe Rogan Experience is halted indefinitely.

Rogan expects the suspension to last “deep into next week.” He described the criteria for resuming — “10 days and three negative test results in a row.”

The podcast is normally produced in a permanent studio where guests appear in person. Rogan speculated that some remote production might fill the gap, but was indefinite in his thinking-out-loud speculation about that.

Rogan also explained that the operation was shut down last week for vacation, and that the posted episodes during that week were recorded in advance.