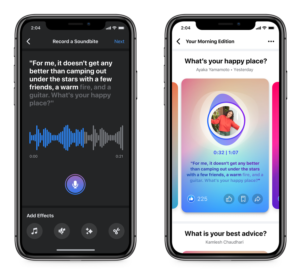 Yesterday we posted our acerbic comments on Facebook’s unofficial and undefined (at the time) audio plans, with our long-standing resentment that the platform has ignored audio for years. Today comes an official announcement with considerably more detail about products and timelines.

After an intro which evangelizes audio (“Audio seamlessly fits within our busy lives, allows us to be inspired by new ideas, and talk with other like-minded people…”) without acknowledging the platform’s utter lack of native audio in any form for 16 years, the notice buckles down to describing products in the works, including an audio demo (see below).

These are the key details:

This is a little vague, but seems to be a set of audio capture and processing tools built into the main Facebook app. “Through our advances in AI, we can make audio quality magically great — even if you record on a busy street corner,” FB says, and demonstrates what we  can expect:

FB describes this as “short-form, creative audio clips for capturing anecdotes, jokes, moments of inspiration, poems, and many other things we haven’t yet imagined.” We imagine it as resembling Anchor v1, which, before Anchor tried to be radio-like, and then pivoted to podcast creation, was a beloved clip-trading social network.

But we’re not certain of the similarity. We hope it’ll be native audio as a FB posting and commenting option. In the announcement, though, FB talks about celebrities posting prepared audio … which sounds like, you know, podcasting or some rudimentary and platform-limited form of it.

Hitting the podcast nail on the head, Facebook announces its entrance “within the next few months.” The announcement contrasts this initiative with “short-form audio” (referring to Soundbites product described above) — “Some stories and conversations deserve more airtime,” FB observes with an offhand radio reference. The company notes that 35-million people are members of podcast promo pages on the platform, “but until now, you had to leave the Facebook app to listen to these episodes.” So podcast listening is coming soon. FB wants to tackle discovery, too, and plans to use its epic volume of first-party data to connect users with shows they might like. The company implies that episode-specific recommendations will be in there.

This is Facebook addressing Clubhouse, like a lumbering Goliath stepping into David’s backyard. Expect this to be fully rolled out “by the summer,” FB says. (That’s winter to our Aussie friends.) The product will be launched in Facebook Groups, which certainly makes sense. The groups are used by 1.8-billion people, the announcement casually mentions, as if politely asking Clubhouse how many users *it* has in its iOS-only club.

The Magic of Intersection

Interestingly, Facebook promises that all these products are built to work together. And here is the first example given: “With live audio, creators will be able to turn a live conversation into a podcast for everyone to listen to later.” OK then, Facebook will become a podcast host/publishers this year, taking multiple pages from Anchor’s playbook.

Users will be empowered to snip excerpts of audio on the platform, and post them on their timelines (as “Soundbites”).

Captioning will be available.

And this, of extreme interest: “Over time, all these different formats will live in a central listening destination on Facebook where people can find new things and new people to listen to.”

Basic launches happen first, Then, FB promises, money-making will be added both entrepreneurially and via a FB Audio Creator Fund. Here is the summary:

“When Live Audio Rooms launch, fans will be able to support their favorite creators and public figures through Stars, or donate to causes they care about. Soon after launch, we’ll also offer other monetization models, like the ability to charge for access to a Live Audio Room through a single purchase or a subscription. Finally, to kickstart Soundbites, we’re introducing an Audio Creator Fund to support emerging audio creators and get early feedback on the new product experience.”