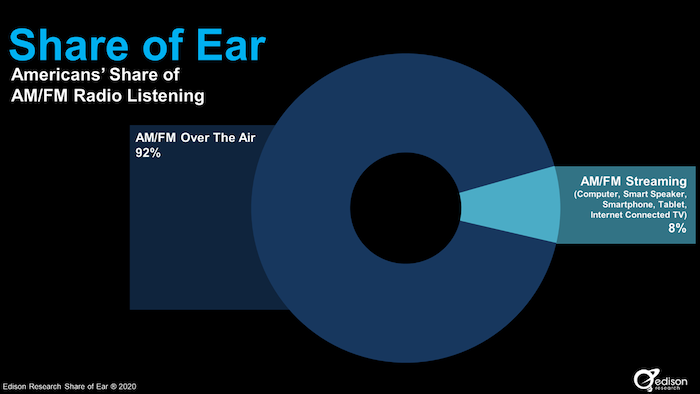 Edison Research released a graphic from its Share of Ear survey. The report found that at its most recent update, streaming now holds an 8% share of Americans’ AM/FM radio listening. Traditional over-the-air listening accounts for the remaining 92%.

“We’ve been tracking the changes in radio listening since the beginning of Share of Ear in 2014. The portion of listening that is digital goes up a tiny bit with each update, but the total amount remains small,” Edison President Larry Rosin said. “Streaming is a bigger factor for spoken-word stations such as public radio news, sports and news talk.”

He also used the data as a talking point for radio’s role in a crisis. Listeners’ behaviors in response to the COVID-19 pandemic have already made an impact on statistics from radio and podcast companies in March.

“President Obama’s then chief of staff Rahm Emanuel is credited with coining the aphorism: ‘Never let a serious crisis go to waste.’ If the radio industry is ever going to really ‘turn the corner’ on digital listening, this may need to be the crisis that makes it happen,” Rosin observed. “Radio needs to do all it can to remind listeners that they still can listen, on smart speakers, through phone apps, and their computers.”