You know an app is buzzworthy when research organizations study it. So it is with Clubhouse, the iOS-only, Android-excluding social audio app that has quickly gained high awareness. Toronto-based Signall Hill Insights partnered with social media researcher Digital Hug in a two-phase study of usage of, and sentiment for, Clubhouse. It’s called Who’s in the Club?, and is described HERE.

Two modalities govern this research. Digital Hug analyzed a million social media posts authored by 580,000 individuals, about half of which originated from the U.S. and Canada. Signal Hill Insights surveyed a representative online sample of over 3,000 Canadians from Maru Voice Canada in March.

On the “early days” point, we are reminded that in RAIN’s recent Podcast Business Summit, Podnews editor James Cridland said “I give Clubhouse six months.” Using the app is an invitation-only opportunity, which limits growth. In February, Clubhouse hired an Android developer, indicating an acknowledgement of 85% of global smartphone users. If both those conditions are remedied we think Clubhouse could grow much faster.

As of right now, the Signal Hill / Digital Hug study shows that 83% of Canadian adults have never heard of it, and 6.5% have used it. So, first inning for sure. 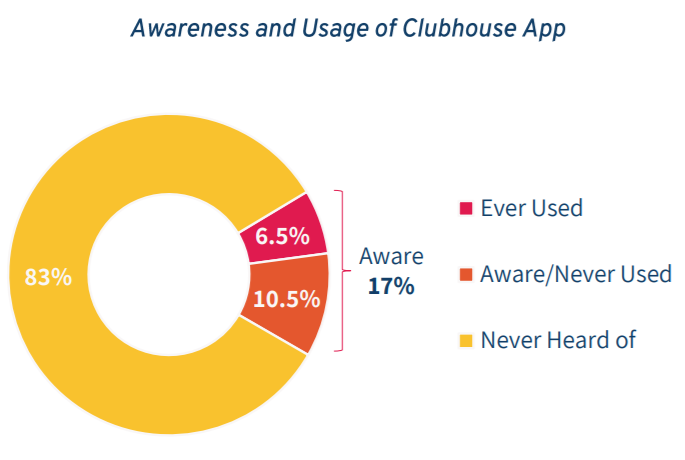 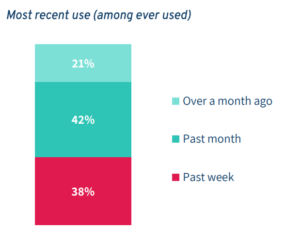 Weekly usage, which might be considered an indicator of habitual adoption, stands at 38% in Canada.

Interestingly, opinions of Clubhouse among Canadians who have used it is spread across a spectrum, but with only 2% predicting the app will be “a big success.”Between 12% and 18% of respondents characterized Clubhouse as “a fad,” “a social network I don’t really need,” “time-water,” and “elitist.”

Digital Hug’s vast survey of social media posts identified areas of profession among users. “Creative Arts” was the top profession. More corporate professional categories took the next highest slots: Sales and marketing, Executive Management, and Banking and Finance. All three of those user groups over-indexed by more than 2x their representation in the population — perhaps an indicator that Clubhouse is being appropriated as a B2B app. Or perhaps that those professions over-index for sending invitations.

There is more to this study than covered here. It is AVAILABLE for free.